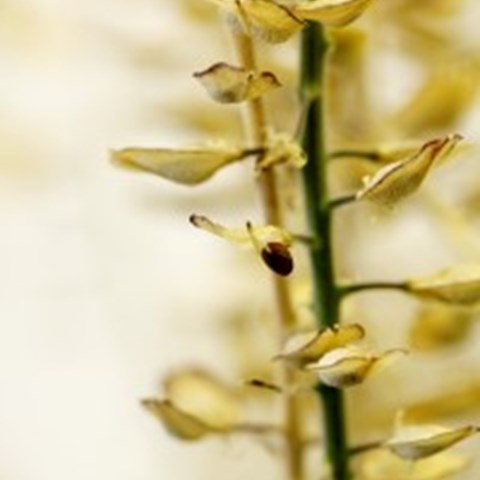 There is an increased demand for vegetable oils for food, bio diesel, and as raw materials in the chemical industry. The possibility of increasing production from existing oilseed plants in Sweden is limited, as the only commercially viable oilseed plant is winter rapeseed. However, rapeseed can only be cultivated in the southern parts of Sweden. The wild species field cress (Lepidium campestre) is winter-hardy and well adapted to the Swedish climate.

Field cress (Lepidium campestre) is well placed to become a new oil crop with its many oil-rich seeds. As the field cress is biennial, the problem with nutritional leakage from the ground should be reduced as the crop remains in the field during the winter, and also because there is no need for tillage as often. It would be feasible to intercrop field cress with varieties of cereal, for example barley or wheat.

To genetically improve a wild plant to become a functional crop requires a lot of time and work. Many traits that are beneficial to wild plants are in fact less optimal in the field. Two such traits are pod shatter (when the seeds drop to the ground) and asynchronous flowering. These are traits we are trying to alter.

Another matter is the oil quality, where we are attempting to increase the amount of healthy fatty acids and reduce the amount of unhealthy ones. We are also trying to increase the total oil content and the total seed yield. When the oil has been pressed out of the seeds, you are left with a residual product which can either become fertiliser or animal feed for pigs and cattle. In order for this “seedcake” to function as feed, we need to reduce the content of unhealthy glucosinolates in the seeds.

Another objective is to produce field cress that can withstand the fungi Plasmodiophora brassicae and Alternaria brassicae, two pathogens that also infest rapeseed. The resistance against pathogens varies within the field cress species and is something that we make use of in the breeding. We are also working on reducing the seed dormancy and improving the root system in order to increase the plant’s nutrition uptake.

We have gathered seeds from hundreds of populations of field cress, in Sweden and other countries, which we use in crossings in our breeding work. For certain traits we have also used other species from the plant family Lepidium in the crossings. Another part of the breeding process focuses on specific genes, either shutting down, reducing or increasing the activity of one or more genes (gene expression), or introducing new genes to the field cress.

The goal of the project is to gather all the beneficial traits of the same breeding lines, which is a difficulty faced in all types of breeding. We achieve this by using both conventional and molecular selection methods and by making several genetic changes in the same plant line through biotechnology.

In our efforts to make the field cress suitable for cultivation, information concerning a major part of the genetic material can be of great assistance in the selection, primarily concerning traits controlled by many genes. We are developing a "genomic toolbox". We produce this by analysing the field cress and crossbreeds of field cress and its relative L. Heterophyllum, and comparing the variations in traits between different individuals with their genetic variations (genome-wide association study). We have already found more than 90,000 so-called SNP (single nucleotide polymorphisms) – places in the genome where the bases (A, T, C or G) vary between different individuals. Now we are able to search for the genetic variations that correlate with different traits in the offspring, and create a map of where in the genome the gene for each respective trait is situated.

As the cultivation conditions in the greenhouses and net house differ from cultivation on regular fields, we need to test cultivation of field cress in carefully designed field trials. Previous field trials have been restricted to only one plant line, and in the tests we took no measures to combat insect pests, pathogens or weeds. That particular plant line’s resistance to weeds was considered weak. On the other hand its winter-hardiness is excellent.

Now we are conducting field trials using several lines which we have modified regarding competitiveness, reduced pod shatter, increased oil content and improved oil quality. We have improved certain lines through genetic modification, whilst others are the result of breeding using only crosses and selection. First we cultivate the field cress in monocultures, then we sow the best lines together with cereal (spring wheat or barley). We are gathering data about different traits, effects of weed control, insect and pathogen resistance, fertilisation and methods for sowing, to get an overview of the strengths and weaknesses of the field cress in the production system.