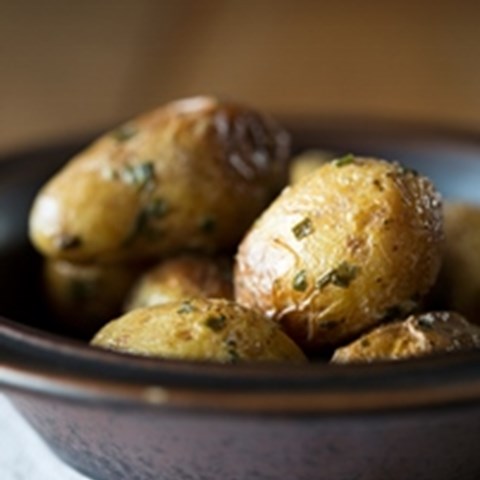 Many people all over the world eat potatoes. The starch-rich tubers also make them valuable for various industrial purposes, however potato breeders and growers are waging war on a number of diseases and insect pests.

In particular late blight, caused by Phytophthora infestans, leads to major problems in potato cultivation around the world. At the same time, there are problems with over-fertilisation of our surface waters. We could reduce over-fertilisation if agricultural crops such as potatoes were better at taking up nitrogen from the soil. It is also possible to make the potato's carbohydrates slower, and thereby healthier, by changing the starch composition. The goal of our potato breeding project is to produce resistance to diseases, increase the nutritional uptake and raise the amylose content, and then combining these traits in the same potato clone. We use several different breeding methods and techniques, some of which are classified as genetic modification, and others as conventional breeding.

In order to prevent or limit the infestation of Phytophthora infestans and subsequent diseases of leaf and tuber late blight, chemical pesticides are often needed. By combining at least three resistance genes from wild potatoes into cultivated potatoes, we want to develop a sustainable resistance to P. infestans to reduce the use of pesticides. The recipients of the resistance genes are the potato varieties Desirée and King Edward. In order to make it difficult for the pathogen to overcome the resistance, we will mutate so-called "susceptibility genes" by using directed mutagens with the help of CRISPR/Cas9 technique. We are also developing other new methods (see the section on Genomic selection below).

By combining marker-based selection with estimated breeding values for both simple and complex traits, we are able to reduce the time needed in the selection stage in the breeding process. Currently, marker-based resistance breeding in potatoes is limited to only a few genes which affect resistance to late blight, nematodes and virus.

We are examining whether it is possible to use genomic selection in SLU's breeding programme for potatoes. We also want to find out if it is possible to introduce diploid variants in commercial cultivation in Sweden. We use between 250 and 300 potato clones for genomic and peptide-based selection, and this is the first time anyone has made this type of comparison in a crop. In addition to resistance to late blight, we are analysing what causes traits such as yield level, resistance to Fusarium fungi and scab, green and deformed potatoes, skin colour and structure, how deep the eyes sit, boiling properties, colour before and after boiling, and glycoalkaloid content.

Starch consists of amylose and amylopectin. The first substance has a low glycemic index and is consequently regarded as being healthier. At the same time, there is a multitude of industrial applications for both amylose and amylopectin on their own. We have already developed a potato that produces starch with more amylose and an altered amylopectin structure. We did this by silencing two enzymes which affect how the starch molecule is branched, with the aid of RNA interference (RNAi). We are in the process of producing a new, similar, amylose potato, but instead we are using directed mutagenesis with the aid of the CRISPR/Cas9 technique to silence the two enzymes. The analysis of the starch quality is described here.

Crop production depends to a large extent on the supply of plant nutrients, in particular nitrogen. Increased over-fertilisation is a global environmental problem. Improved nitrogen uptake by the crops can contribute to reducing the need for fertilisation, and thereby reduce over-fertilisation.

The most promising potato clones that we are developing in the programme are tested in field trials. All potatoes included in the field trials are cultivated according to a joint plan enabling the comparison of traits developed using different breeding techniques in different potato clones. In addition to the analysis of yield, resistance, quality and so forth, we are examining how microbes that live in the soil are affected by the potato clones’ various traits. At the same time, the microbes affect how well the plants grow, for example by altering the access to nutritional substances and influencing the plant’s resistance to disease and drought tolerance.

This is the first step in connecting the properties of the potato and the microorganisms. We are also studying the connection between soil/plant ecology, yield and production systems, and whether there are any traits that are affected by the selection of breeding method. Based on the field trials, we make economic analyses of the use of resources (input in the cultivation) compared to yield; for example, reduced need for fertilisation and pesticides. The analysis includes social sustainability aspects, for example how a reduced need for pesticide affects the farmer’s income, health and quality of life.