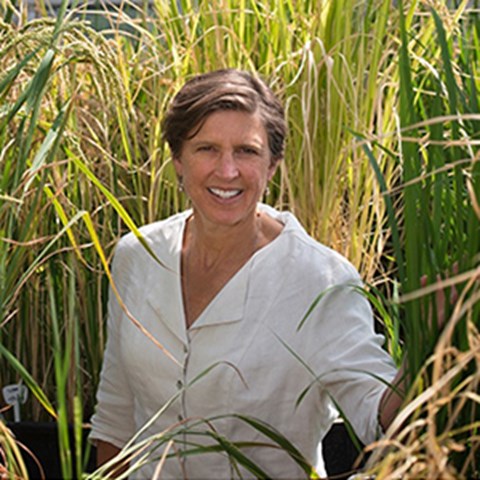 Pamela Ronald has been appointed honorary doctor at SLU's Faculty of Natural Resources and Agricultural Sciences.

Pamela Ronald studies genes that control resistance to disease and tolerance to stress in rice. Her goal is to improve food security for poor farmers.

Since 2002, she is a professor of plant pathology at the University of California, Davis, where she is also the director of an institute that promotes the popularisation of science. Ronald has been a member of the National Academy of Sciences since 2019 and a Fellow of the American Association for the Advancement of Science since 2006.

Her research has resulted in rice varieties with increased tolerance to bacterial diseases and floods, two crucial threats to rice cultivation in Asia and Africa. In 2015, five million farmers planted a flood-resistant rice variety developed in collaboration with plant breeders at the International Rice Research Institute. Many genes that are valuable in plant breeding originate from plants in developing countries, and Ronald has therefore established a fund that aims to redistribute plant-breeding profits to source countries.

Ronald has been praised both for her rice research and for her work with popular science. Her TED talk on plant genetics, food safety and sustainable agriculture has been translated into 24 languages. Together with her husband, Raoul Adamchak, she has written a book on how modern plant breeding with genetic engineering, together with organic farming methods, can contribute to the sustainable development of agriculture. Researchers at several SLU departments praise her excellent contributions to science and outstanding ability for balanced communication, and hope for future collaboration in spreading knowledge about agriculture and plant breeding throughout society. She received a Masters degree at Uppsala University funded by a Fulbright Fellowship.