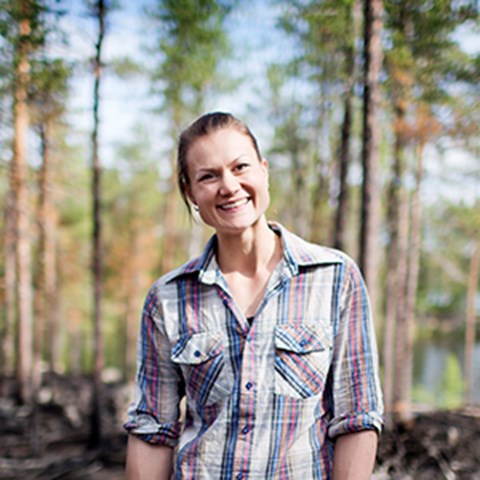 Heidi Andersson has been appointed Honorary Doctor of Forest Sciences by the Faculty of Forest Sciences. She is a forest owner and arm-wrestler and has a genuine commitment to environmental issues. She and her husband now run the blog www.fossilfri.com, aiming to be fossil-free by 2025.

Heidi Andersson comes from a village called Ensamheten ("solitude") in Storuman municipality. She is a forest owner, blogger, entrepreneur, and has won the world championship in arm wrestling eleven times. She first became known to the public through the documentary "Armbryterskan från Ensamheten" (The arm-wrestler from Solitude).

She is genuinely committed to environmental issues and has, among other things, presented a children's TV programme about "environmental heroes" from 2009 to 2012. She now runs the blog www.fossilfri.com. The aim is that Heidi and her husband, biathlete Björn Ferry, will be fossil-free by 2025. "Being fossil-free means that we will stop using oil, coal and natural gas. It's a big challenge, yes, but not a sacrifice. Being fossil-free and taking care of our planet is something we all must do sooner or later in order to ensure human life in the future." The latest example of their commitment is the series of TV programmes called "Storuman Forever" (on people and the climate), which aired on Swedish television during the spring of 2018. The programmes are also part of the project #storumanforever.

The nomination states, among other things: "By practising what she preaches, she is a great role model for people of all ages, but especially for young people entering adulthood and working life. Heidi Andersson's concrete commitment to both local and global sustainability issues, and her way of conveying her message while inspiring others to do the same, makes her a very appropriate ambassador for the faculty."