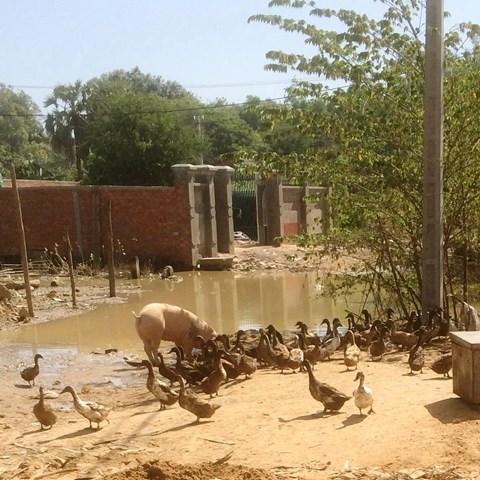 Thanks to joint research between SLU and researchers in Vietnam, the technology of biodigesters were developed. Today, the use of biogas digesters in small households is very common all over Vietnam. It reduces greenhouse gas emissions and the waste from livestock is used in an efficient way.

The technology with biogas digesters had been known for long in Vietnam but not established due to high costs and difficulties using it. Thanks to joint projects with researchers from Vietnam and SLU, a new kind of plastic tank were established on the market. Together with developed technology for easier use, farmers could investigate in the more efficient and environmental friendly biogas digester instead of the regular wooden stove which was the most common type at the time.

“The government is, via a financial assistance programme, encouraging farmers all over the country to swap their wood-burning stoves for biogas, coming particularly from pig waste.“ - Evaluation of SLU's research and capacity collaborations with Vietnam 1977-2018.

The use of biogas digesters for cooking is not only a benefit for the farmers’ economy, it also reduces the carbon emissions to the atmosphere. Manure from millions of pigs and other animals is causing large amount of methane emissions, a much stronger greenhouse gas than carbon dioxide. With the new technology, the manure could be used in an environmental cycle. When the manure is digested and used for cooking, the emissions are remarkable reduced to the atmosphere.

“Today, biogas digesters are one of the most popular technologies in rural areas, helping to mitigate environmental problems caused by animal waste and converting waste into energy for home consumption.”