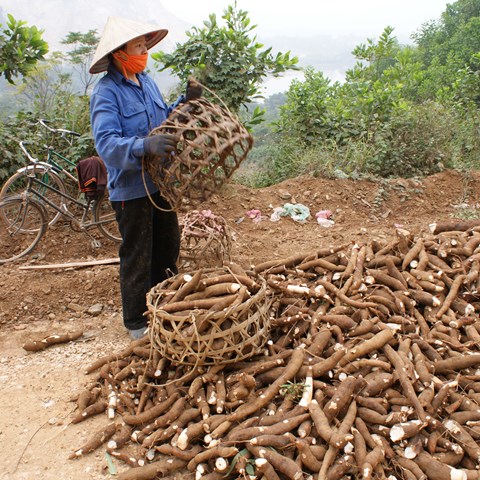 The use of locally produced by-products for animal feed have reduced the waste and greenhouse gas emissions. It also increased the nutrition and protein in feed for pigs and other animals.

The usage of local by-products from both plant production, fish farming and animal production have created a more closed system where all parts of the chain are taken care of.

"One of the objectives of the Sustainable Livestock-Based Farming Systems Research programme initiated in 1989 was to develop livestock production and integrated farming systems for small-scale farmers in Vietnam using locally available resources." - Evaluation of SLU's research and capacity collaborations with Vietnam 1977-2018.

For example has an increased shrimp production over the years resulted in large quantities of by-products (heads, shells etc.) which are considerable parts of the product. It was earlier thrown back into the waters causing large damage to the nature in terms of polluted water for humans and animals. Thanks to research, the by-products from shrimp industries could be used as protein source for livestock instead.

"The deficit of protein sources has been serious constraint to livestock development" - Evaluation of SLU's research and capacity collaborations with Vietnam 1977-2018.

If farmers used a mix of shrimp by-products together with sugar cane molasses or cassava roots, a considerable improvement were seen in the animals. The by-product did not only improve the livestocks weight and health, it also benefitted the farmer economically and reduced the environmental impact on nature.

Using shrimp by-products is today commercialised and a considerable part of animal feed in Vietnam.

Another example is by-products from cassava which today are a considerable part of the feed for pigs. Before research started 1995 small scale farmers where using cereal grains, products that were better used for humans. Cassava is the third most important crop and contains a large amount of carbohydrates and protein. Thanks to research, it was possible to reduce the amount of cyanogenic glucosides (converted to hydrogen cyanide) and a considerable improvement were seen with higher weight and healthier pigs. It also reduced the feed costs for the farmers.

The manure from the animals can be used as biogas for cooking and household energy or sold to worm farmers who use it as material in their production.

"These by-products, introduced to small scale farmers all over Vietnam, have reduced poverty in rural areas, enhanced food safety and improved the sustainability and income of livestock farming in Vietnam. At least 100,000 households are nowadays using various local by-products as animal feed." - Evaluation of SLU's research and capacity collaborations with Vietnam 1977-2018.