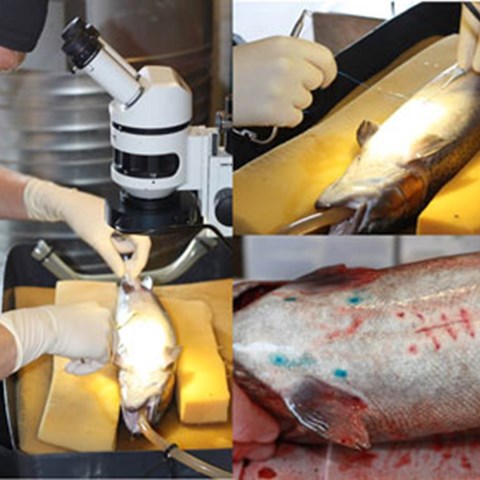 Several national and international studies have shown that the welfare of fish in aquaculture in many aspects is substandard. This is partly because it is difficult to assess fish stress, suffering and well-being as they lack many of the behaviors that signal negative stress, disease, pain and discomfort in other animal species.

Several national and international investigations have reported that the welfare of fish in aquaculture in many respects is compromised. This is because in modern fish farms, tens of thousands of fish are held together in large rearing pens preventing the human caretaker to visually evaluate the welfare of an individual fish. Also it is difficult to assess the stress, suffering and welfare of fish as they lack many of the behaviors that signal negative stress, disease, pain and discomfort in other animal species.

Animal welfare legislation states that fish kept by humans must be protected from unnecessary suffering before and during slaughter. How fish experience life in the fish farms is largely unknown, but it is clear that many of the methods currently used for, crowding, transporting, stunning and slaughtering fish is substandard as they cause poor welfare for the animals. To minimize the stress in aquaculture and to ensure that the fish are killed quickly, painlessly and efficiently, is ethically important, especially in the large number of individuals affected.

The purpose of the project is to thoroughly map and measure a variety of behavioral and physiological stress indicators in farmed fish, before, during and after different stages of the slaughtering process. The initiative for the project is welcomed by the fish farmers as there is a connection between problems with, for example, meat quality and various diseases of fish and the fact that the animals are stressed in the farms. Experiments will be carried out directly at the premises of the fish farms. We use state-of-the-art techniques to quantify physiological stress to determine and compare how common and novel methods used for stunning and killing affect the welfare of farmed. By surgically implanting recently developed biotelemetry equipment we can now monitor one or multiple physiological and behavioural stress indicators for long periods (>several weeks) in free-swimming fish (i.e. 'focal animals') within the gigantic school of fish in the rearing pens and "listen to" how animals perceive critical events at the farm from an animal welfare perspective.

The experimental results from the project, in combination with existing scientific literature on fish welfare, will form the basis for the development of evidence-based educational material. This initiative would not only serve to educate personnel at fish farms and relevant authorities, but also be a first step towards rectifying current legal shortcomings during fish slaughter.