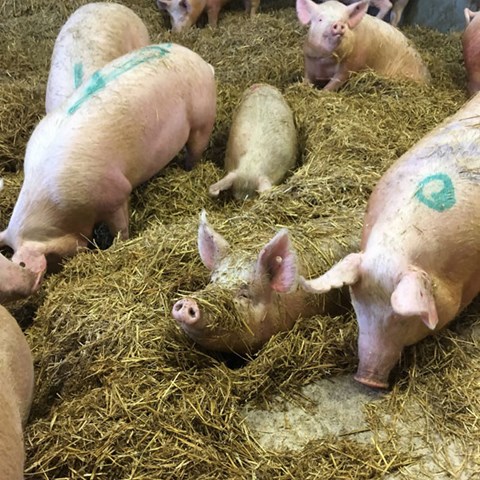 - Effects of genotype and rearing strategy on gilts’ social ability, productivity and reproduction later in life.

The transition from individually stalled to group housed gestation sows is an ongoing process in the pig industry in Europe. Piglet production is based on batch-wise production, where a group of sows are maintained over several parities. Eventually it is however necessary to recruit new gilts into these stable groups. Group housing has clear animal welfare benefits, e.g. offering sows freedom of movement and possibilities to display important species-specific behaviours, but the risk of the sows seriously injuring each other is also higher in these systems. Aggressive behaviour is an important component of normal social behaviour in pigs and especially important during the process of developing a hierarchy in a new group. However, fights after introducing replacement gilts into established sow groups often result in severe injuries, which sometimes leads to death or culling. This is thus not only a welfare problem for the sows, but also an economic problem for the producers when they are forced to remove the sows from production earlier than planned. The development of pigs' social ability and the occurrence of harmful aggressive behaviours are affected, for instance, of the animal's social environment during rearing and the genetic background of the pigs. The long-term objective of this project is to develop sustainable and commercially relevant rearing and breeding strategies aiming for gilts adapted for group housing sow production systems focusing on the welfare of the animals. We will investigate differences between breeds indirectly selected for group housed or individually stalled environments as well as effects of different social environments during rearing. We will study long and short-term effects on the development of gilts´ social ability, health, welfare, reproduction and production from birth until their second gestation. The results will be an important contribution to the next essential step in the development of group housed sow systems; using pigs genetically and behaviourally suitable for group housing.

Links to publications in the project:

Links to completed student works associated with the project: