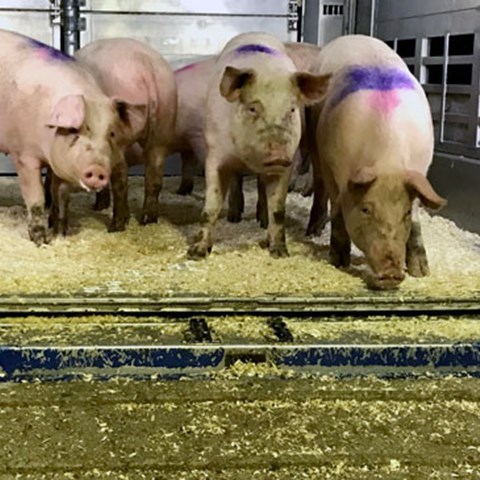 In Sweden around 2.5 million pigs per are slaughtered each year, reared at almost 900 farms. At around 6 months of age the pigs are transported on specially designed trucks to a large-scale slaughter plant. The transport company is responsible for good animal handling during loading, driving and unloading. A pilot study (Bornhede, 2014) showed that transporters worked the pigs in very different ways while loading or unloading them, and expressed worries for not carrying out the work correctly and that the work was done under strict time constraints.

Through a cross-disciplinary approach, the project will investigate factors that influence both transporters and animals. We want to show that the driving methods can be changed to improve the transporters' work situation and the animals' welfare. We study:

This is an example of research in anthrozoology, which studies the interaction between animals and man.

The project started in the autumn of 2017.

Participating researchers at the department

The project is funded by a grant from the Swedish Research Council Formas (registry no. 2016-01790) and by the Faculty of Veterinary Medicine and Animal Science at SLU.

Further information can be obtained from Sofia Wilhelmsson.