History of the Institute of Freshwater Research 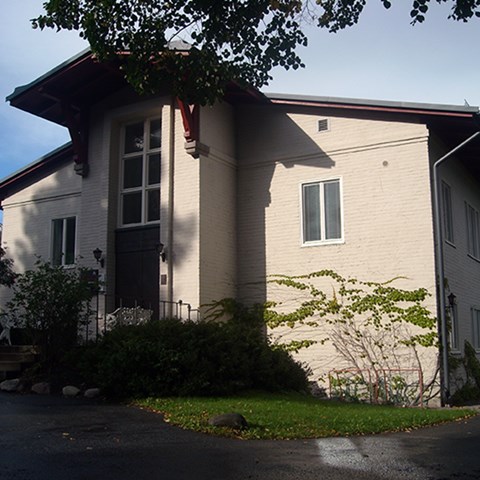 The Institute of Freshwater Research at Drottningholm. Photo: SLU.

It all started in 1932 with help from the Knut and Alice Wallenberg Foundation. The center for research of freshwater fish in Sweden was built near the Royal Palace of Drottningholm. Today the Institute of Freshwater Research is part of the Department of Aquatic Resources at the Swedish University of Agricultural Sciences.

In 1930 the Swedish Parliament decided to construct a national center for investigation of freshwater fish near the Drottningholm Palace  on Lovön, Stockholm. The building was designed by the architect Torben Grut.

The total cost was SEK 315 000. The building was modern and contained rooms and equipment for both chemical analysis, bacteriology, weighing, photography and large rooms with aquariums and hatching containers, and of course a library. The institute had its own water system with outlets throughout the house as well as untreated water from Lake Mälaren.

Center for research on fish in Sweden and internationally

The Institute of Freshwater Research became a part of the National Board of Fisheries, and became a center for the development of research on fish and its environment in Sweden. Much was due to the few and scientifically very distinguished executives at the institute, e.g. Gunnar Alm, Sven Runnström and Gunnar Svärdson.

Throughout the period, the basic problems of fish migration and expansion, competition, predation and genetics, has been the main focus of the research, leading to applied fish management. Important species has been pike, perch, eel, whitefish, trout, char and crayfish. The main achievements in a historical perspective have been linked to intraspecific competition in fish species, water management problems in the Swedish mountains (including the introduction of Mysis relicta), the introduction of signal crayfish and speciation of whitefish and trout. In these areas, the laboratory has been internationally leading.

Since July 1, 2011, the Institute of Freshwater Research is part of the Department of Aquatic Resources and the Swedish University of Agricultural Sciences, SLU.