The noble crayfish in Sweden – genetics, conservation and sustainable use of an endangered species

The noble crayfish (Astacus astacus) is of large social, cultural, and economic value in Sweden, and there is strong political resolve to develop ecologically sustainable aquaculture of the species. At the same time, the noble crayfish is critically endangered due to continuous spread of crayfish plague, pollution, acidification, and competition from introduced North American signal crayfish. To date little is known about intraspecific genetic variation, including presence of heritable phenotypic differences between local populations (local adaptations). Nevertheless, management actions such as re-introductions and supplementary releases using exogenous populations are commonly applied, although few follow-up studies have been done on the outcome of such activities.

In this project, researchers from the Department of Aquatic Resources perform controlled breeding studies aimed at identifying heritable differences in important phenotypic traits, such as growth rate and survival, between populations from different geographic areas in Sweden. In parallel, a large material of molecular data for in-depth studies of genetic population structure, microevolutionary processes, and evaluations of stocking programs has been collected. The results are anticipated to be of importance when selecting suitable brood stocks for effective future aquaculture endeavors of noble crayfish for consumption and stocking. The knowledge obtained will also serve as a necessary basis for effective management, conservation and sustainable use of populations in the wild.

Popular scientific article about the project:  A noble pursuit 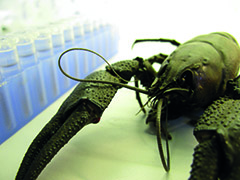 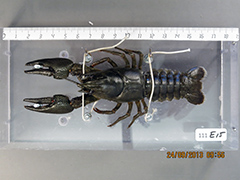 Measuring a noble crayfish used in the breeding experiment.

Female noble crayfish with fry. She takes care of the fry during the first period after hatching..

Indoor tanks where crayfish females hatched their fry in individual trays. The offspring were then released in experimental ponds in different parts of Sweden..

Experimental ponds in southern Sweden. Crayfish from several populations in Sweden are reared together in these ponds under the same environmental conditions (so called common garden experiments), which makes it possible to study genetically based differences (in for example growth rate) between families and populations.