Diadromous fish, which migrate between fresh and saltwater habitats, are declining in the Baltic Sea and worldwide. These populations are exposed to a variety of anthropogenic pressures both inland and at sea, not least climate change. Conservation and restoration efforts are hindered by the fact that freshwater and marine ecosystems are typically studied and managed individually. The project COAST-LAND aims at reconciling such a rift through a multi-system approach that brings together datasets, scientists and managers from the two realms.

The overall aim of the COAST-LAND project is to improve future management of diadromous fish populations, such as pike (Esox lucius), perch (Perca fluviatilis), burbot (Lota lota) and sea trout (Salmo trutta), in the Baltic Sea by:

Diadromous fish are highly valuable for human societies as well as ecosystem health, as they provide food and recreation (fishing) and regulate important ecosystem functions via predation and transport of nutrients between coastal and inland ecosystems.

However, freshwater areas, such as creeks, rivers and coastal wetlands, are under high pressure, first of all because of the increase in human populations and infrastructure, which significantly modify the habitat along the shoreline, and second because of the alterations in hydrological regimes caused by climate change. Also, hydropower plants, river damming and culverts disrupt the spatial connectivity and pose significant challenges for fish migrations upstream and downstream. At sea, eutrophication, fishing and predation from seals and cormorants threaten fish populations, and affect the number of viable adults that will eventually go back to freshwater grounds to spawn.

Anthropogenic stressors, climate change and loss of connectivity can therefore give rise to feedback loops across ecosystems that could accelerate the decline of diadromous fish populations. 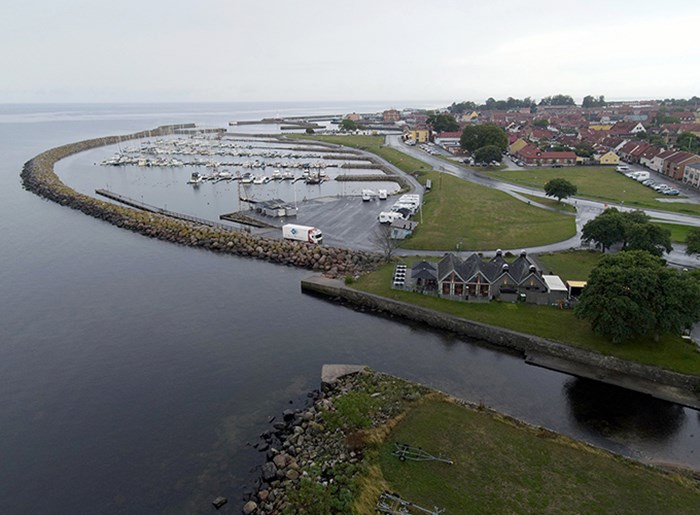 Here, the Tommarpsån river flows right next to Simrishamn's marina, Skåne. The river is an important spawning area for thousands of sea trout that migrate in for spawning every year. Their migration can be disturbed by boat traffic, noise and the artificial outlet of the river. These affect not only sea trout but also herons and kingfishers waiting for the fish… Photo: Erik Degerman, SLU Aqua. 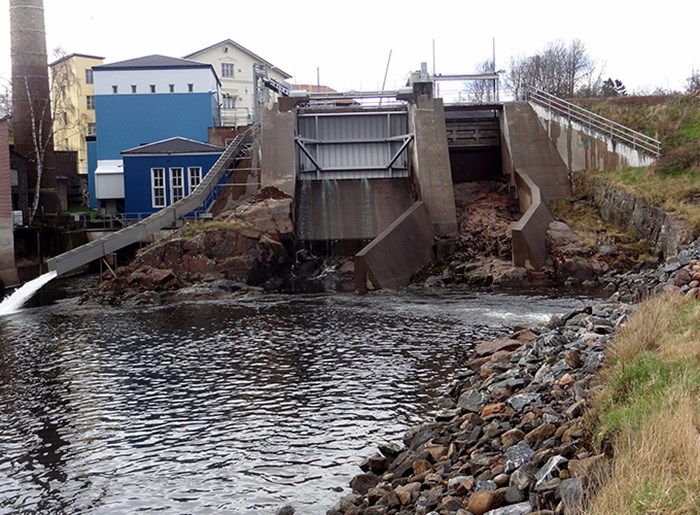 Hedefors hydropower plant in Säveån, outside Gothenburg, was a definite barrier for migratory salmon, trout and eel for over 60 years. In 2013, a fish ladder was built around the obstacle and the fish can migrate upstream and downstream again. Many similar barriers remain without planned restoration measures. The question is: where should we prioritize these measures? Photo: Erik Degerman, SLU Aqua. 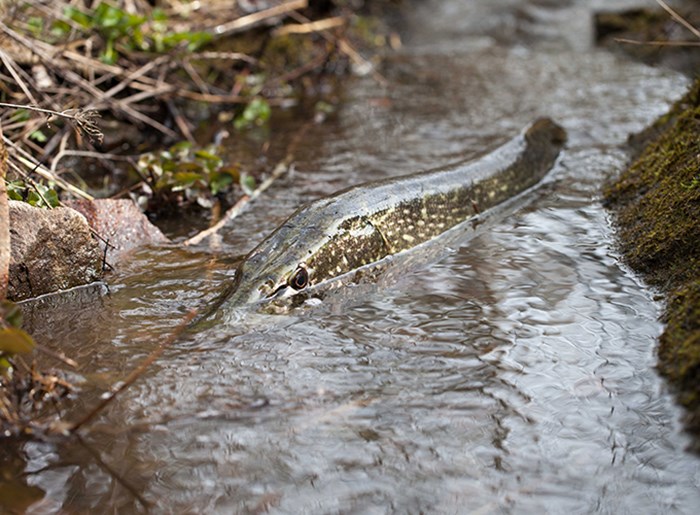 Pike spawn in shallow coastal wetlands, areas often drained to gain ground. The same areas may be flooded again if sea levels rise due to climate change. In the northern Baltic Sea, however, the impact of future sea level rise is counteracted by the ongoing land uplift. Photo: Micael Söderman, Sportfiskarna.

The project has two part parts:

We know that multiple stressors affect inland fish populations (e.g. hydropower plants, river damming, habitat degradation, and chemical pollution), as well as coastal fish populations (e.g. eutrophication, overfishing, alteration of food webs, and changes in the coastal landscape). What we do not know is how the effects of these multiple stressors in coastal and freshwater habitats propagate and interact across these systems.

By using extensive datasets from the whole Sweden on fish abundance in inland and coastal waters, complemented by GIS data, we will investigate cross-system effects of human impacts on diadromous fish populations in the Baltic Sea.

We will also use otolith microchemistry on fish collected from the field to estimate the proportion of freshwater spawners in coastal populations, the relative importance of freshwater spawning grounds at different latitudes, and the effectiveness of restoration measures such as dam removals, adaptation of culverts, and, possibly, the creation of coastal wetlands.

Climate change is expected to have pronounced effects on diadromous fish populations through alterations in temperature and hydrological regimes, which could potentially lead to the loss of spatial and temporal connectivity between freshwaters and coastal waters. Some nursery grounds may become dry, while new wetlands may be created, producing a spatial mismatch between suitable habitats.

Furthermore, the rate of species range shifts is predicted to be faster in marine than inland systems, where movements are constrained by the spatial structure of riverine networks. Finally, seasonal changes in precipitation may lead to a temporal decoupling between the spawning period and the availability of freshwater habitats.

Here, by using time series analysis, spatial modelling, and Bayesian Networks, we will evaluate past climate-driven changes in species distribution and suitability of spawning areas, and assess potential loss of (spatial and temporal) connectivity between freshwater and coastal habitats under climate change scenarios.

COAST-LAND and the research team

COAST-LAND - Connectivity between inland waters and coastal habitats: effects and feedbacks of anthropogenic pressures and climate change is funded by Formas – a Swedish Research Council for Sustainable Development (grant number 2020-01071).