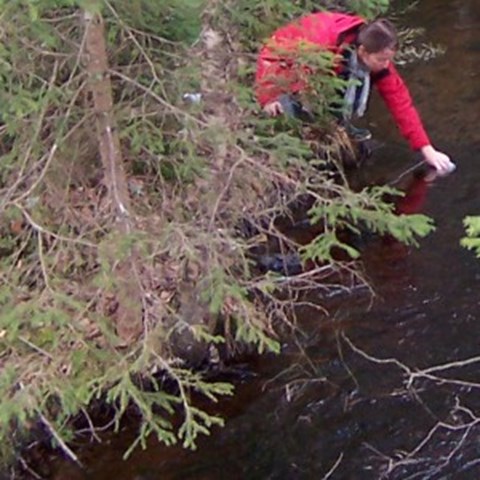 Sampling in a stream with humic brown water.

The light permeability of water depends on the presence of suspended particles and dissolved substances in the water. In a filtered water sample, it is chiefly the light absorption of dissolved substances that is measured. In natural water, the absorption is mainly influenced by the content of humic substances and certain iron and manganese compounds; then, one usually speaks of the colour of the water ("brownness").

The difference in absorbance between a filtered and an unfiltered water sample may be used to estimate the particle content in the water. The amount of particles can also be analysed as suspended matter or turbidity. The report “Change of method for measuring the haziness in lakes and water courses – AbsDiff replaced with turbidity 2010” (in Swedish) compares the analysis results between the difference in absorbance and turbidity.

Absorbance is measured using a spectrophotometer, while an older method for determining the colour of the water utilised a so-called colour comparator, where the water's colour was manually compared to various coloured filters. Earlier still, the colour of the water was compared to a dilution series of platinum cobalt chloride (the Pt/Co scale or Apha-Hazen Scale), which later was used to determine the colour scale of the filter of the comparator, hence the unit is in mg Pt/l (mg platinum per litre).

The comparator method has considerable disadvantages compared to the spectrophotometric absorbance method: first, it is a subjective method with large leaps between the scale steps; second, the most commonly used coloured plastic filters were vulnerable to light and became bleached over time. Conversion between the Pt/Co scale and absorbance is very uncertain, partly due to the greater uncertainty in colour determination and the discrete scale in the same method, partly because of great uncertainty in absorbance measurements of platinum cobalt chloride solutions, which is due to the absorbance curve of platinum cobalt chloride being very flat in the currently used wavelength range.

Estimates of the colour number can be made by applying the absorbance value (filtered sample in 5 cm cuvette at 420 nm or 410 nm [according to SS-EN ISO 7887:2012]) to the formula:

According to international standards, the spectrophotometric measurements are to be made in a 5 cm cuvette at 436 nm, but are usually made in Sweden by tradition at 420 nm. Recalculation are according to the same standard be made from absorbance at 410 nm.

From June 2014 is the water laboratory also accredited for absorbance measurements at 254 nm, 365 nm and 436 nm, in addition to the earlier accreditation 420 nm.

Known issues with the parameter and/or important method changes

See information above about colour comparator as well as different wavelengths.