Sensola consists of a traditional laboratory in a controlled indoor environment, which supports an innovative set of portable equipment that is used for outdoor studies. The research is oriented towards environmental psychology and landscape architecture.

The indoor laboratory consists of two experimental rooms with equivalent properties and a control room. The experimental rooms feature equipment for audiovisual simulations of outdoor environments and the possibility to measure psychophysiological responses. Monitoring and analysis take place in the control room. Fully developed, the indoor laboratory will also support presentations of environments in Virtual Reality. 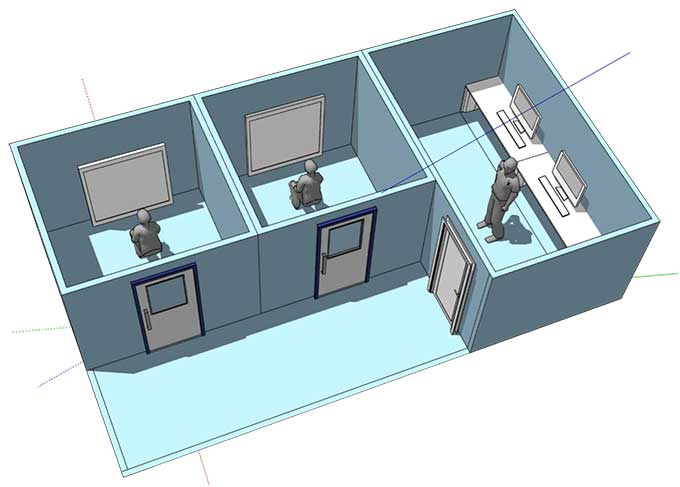 To develop new and in-depth knowledge of how outdoor environments are experienced on site, smart and portable technology is used, which allows people to interact in a natural way with their surroundings. The equipment facilitates collection of location data (e.g. GPS, accelerometry and video) as well as physiological response (e.g. skin conductance, respiratory rate and heart rate). Consumer oriented technology such as heart rate monitors enable data collection on a larger scale. Different types of data can be synchronized, illustrated and analyzed in the physical laboratory indoors. 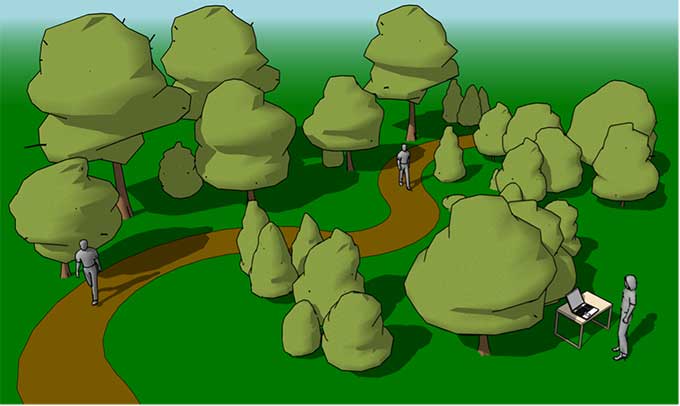 A central system in the laboratory is Biopac’s Bionomadix combined with the software Acqknowledge. Biopac’s portable equipment is used to record physiological data in real time (e.g. respiratory rate, heart rate, heart rate variability and skin conductance). Data is then imported and synchronized in the Acqknowledge software for further analysis.

Eyetracking is a technology that makes it possible to understand how subjects interact with their environments visually, by registering eye movements (saccades), fixations and pupil size. Screen-based eyetracking is used for indoor studies, mobile eyetrackers for outdoor studies. Eyetracking can also be combined with Virtual Reality simulations, VR.

In the laboratory, there are different types of video cameras, both conventional variants, action cameras, spy glasses and smart phones. Action cameras have high resolution and good image stabilization, suitable for documentation of outdoor activities. Spy glasses look like ordinary glasses, but have a hidden video camera integrated in the frame. Modern smart phones have the ability to record video along with other data, such as accelerometry and GPS. They can also be used to synchronize data from external devices via Bluetooth.

Empatica E4 is a portable, medical instrument that is worn like a watch. Empatica E4 has sensors that record skin conductance and blood volume pulse via a light sensor (PPG). The watch has an internal memory, but can also be connected via Bluetooth to, for example, a smart phone to illustrate data in real time. There are two Empatica E4 in the laboratory.

Polar H10 is a consumer-oriented chest strap typically used to measure heart rate during training. The Polar H10 can also record ECG, which can be used to provide information on both heart rate and heart rate variability. Sensola has four Polar H10s in two different sizes.

The working rate of the heart, the pulse, is correlated with level of physical activity, but also says something about the mental state, where a higher pulse can indicate stress and cognitive load.

A type of sensor based on short light pulses. The body's blood vessels absorb the light signals differently depending on blood volume and oxygen saturation. A PPG sensor sends several light pulses per second, and by measuring how much of the light that comes back, a graph of the blood volume pulse can be plotted.

A type of PPG sensor that measures oxygen saturation in the blood. The sensor is usually placed on the finger or earlobe, diodes emit light in wavelengths that are absorbed differently depending on the degree of saturation of the blood.

Measurement of the heart's electronic activity over time. Can be used for detailed analysis of, for example, heart rate variability and heart rate.

There is a natural connection between the body's activity level and respiratory rate, in such a way that the respiratory rate decreases at rest. This relationship can also be double-acting.