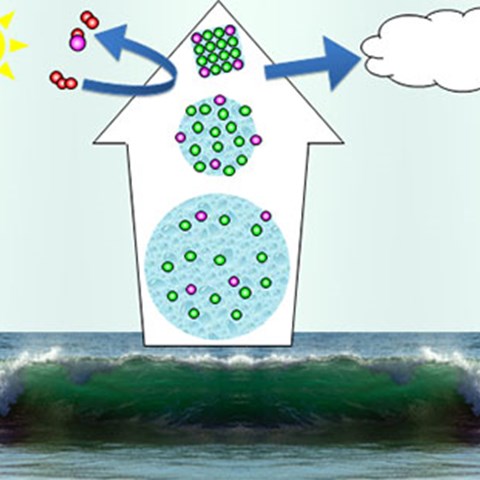 The chemistry in the interface aqueous solution-air is very important in order to understand the chemical behavior of liquid aerosols in the atmosphere. Even though only 1/10000 of all water on Earth is in the atmosphere, the total air-water interface area of this small fraction is 100-10000 times larger than that of all the oceans and lakes due to the small size of the atmospheric water particles.

Small aqueous clusters, as well as larger aerosol particles, are therefore important for atmospheric and climatologic issues. Atmospheric aerosols can often even be visually observed as clouds, but the direct determination of their amounts, chemical composition and size distribution in the atmosphere is far from straightforward. The microscopic size of these small atmospheric droplets makes the surface important for their macroscopic properties. Since water is omnipresent in the atmosphere, one starting point for understanding the their surface properties is the macroscopic water surface. The influence of important factors such as concentration, pH, co-hydration and temperature on the surface composition is even more complex.

Due to surface enrichment, even very minor species may be chemically important as they become more accessible for chemical reactions in the interface region. An example of such an effect is the increased importance of Br- relative to Cl- in atmospheric chemistry than expected from their relative abundance in sea water. The larger surface propensity of Br- relative to Cl-, and its increase as concentration increases upon water evaporation may be the reason for the increased atmospheric abundance of photochemically active gases such as Br2 and BrCl.

Another potentially important surface/bulk-phenomenon concerns “black-soot-like” carbon-containing molecules, which contribute to the heating of the Earth by efficiently absorbing radiation. Due to their low solubility, these molecules are surface enriched in aqueous aerosols. At the surface the molecules are exposed to strong sun-light and oxidizing agents, and become gradually oxidized to alcohol and carboxylic acid groups, causing the carbon-containing molecules to become more soluble, and surface depleted if the compound is charged and has a short alkyl chain, or surface enriched if the molecule is neutral and has a longer alkyl chain. This microscopic process would change the macroscopic absorption/reflection properties of the aerosols, and consequently their climatic effect.