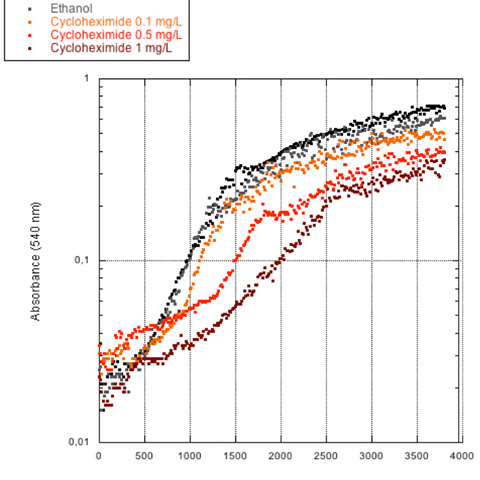 The graph shows how addition of the general toxin cycloheximide negatively affects the growth rate of the ciliate Tetrahymena pyriformis.

There is a need for new methodology to screen for the potential production of toxins in new microbe isolates with useful properties.

New methodology for evaluation of potential toxicity in microbes

In one project the phagotrophic (=particle feeding) unicellular ciliate Tetrahymena pyriformis is used as a biosensor for detection of toxic substances in complex crude extracts and homogenates of microorganisms. For this purpose, we use high through put-systems for rapid determination of effects of test substances on Tetrahymena growth rates. This method has big potential for toxicity screening in new microbial isolates where there is little knowledge available about production of specific types of toxins.

Fate in the environment of biocontrol microbes

The basis for evaluations of the environmental safety of a specific microbial strain is information on its persistance and spread from the point of application to surrounding areas. Knowledge about its natural geographical distribution is also needed. And can use of the strain result in a substantial increase in the total exposure to microorganisms, of workers, the general public or the environment in broad terms?

Genetic markers were developed for specific detection and quantification of several biocontrol microorganisms, for instance the bacterium Pseudomonas brassicacearum MA250. This bacterium has biocontrol effect against snow mould in cereals. The markers were successfully evaluated in a greenhouse experiment with winter wheat inoculated with MA250 and used to study the persistence and spread of the bacterium in a field experiment. One important conclusion was that the bacterium colonised the roots of the growing plants, but not the green parts.

In another study the marker methodology is used for quantification of MA250 in aerosols, during seed application with the bacterium under experimental conditions. 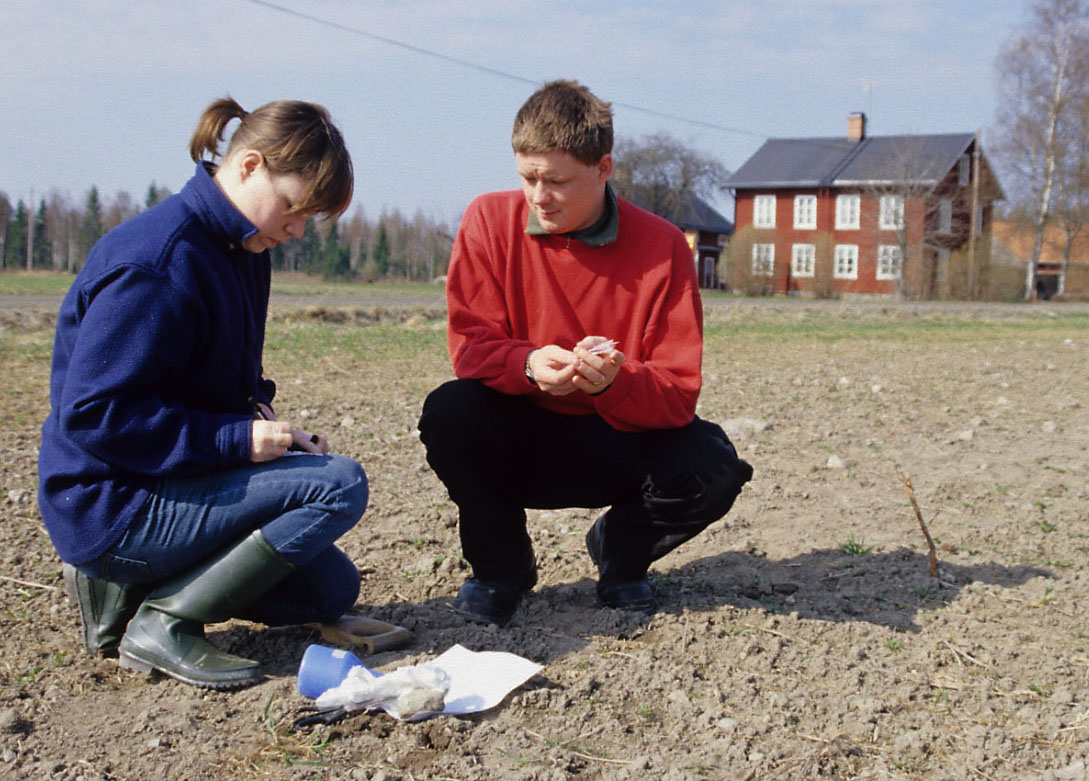 Sampling for analyses of the persistence of the bacterium Pseudomonas brassicacearum MA250 in a winter wheat field where it was added as a biocontrol agent of snow mould.

Products containing the naturally occurring bacterium Bacillus thuringiensis subsp. israelensis (Bti) are increasingly used globally to control massive occurences of flood water mosquito larvae. In Sweden a Bti product has been approved for control of Aedes sticticus larvae in wet meadows and swamps in the lower River Dalälven region. Although all available evidence suggest that Bti is a relatively safe biocontrol product, there is still limited knowledge regarding the potential germination of the bacterial spores and the interaction of Bti with indigenous Bacillus populations in treated wetlands. These questions will be addressed in a project where we use molecular markers and PCR methodology, focusing on the dynamics of the Bacillus bacteria (the added as well as indigenous populations) in both treated and untreated wetlands.

Examining legal structures with bearing on the utilisation of beneficial microorganisms

One study critically discussed the present and prospective future roles of the various regulatory systems that may be applicable to yeasts utilised in the food and feed chain, particularly for post-harvest biocontrol, with focus on conditions in Europe. Major conclusions were that relatively few biocontrol or biopreservation yeasts have as yet reached the market, that the possibility to regulate them as food additives (similarly as for regulation of microbes as feed additives) should be investigated, and that better knowledge about the dominant pathogenicity and virulence factors in opportunistic yeasts could possibly facilitate future safety evaluations of new yeast-based products.

New microbial biocontrol agents fall under the same legislation as chemical pesticides and need pre-market authorisation. In contrast, safety assessments of biocontrol insects, mites or nematodes – often called “natural enemies” – are made in an ecological context, under general legislation covering sanitary aspects and uncontrolled spread of alien, invasive species. Based on a critical examination of this division, it was concluded that assessments of microbial control agents could probably be more efficient and relevant by giving less attention to potential effects of specific metabolites but more attention to the organisms’ biological and ecological properties in combination with realistic exposure scenarios.

Sundh I & Goettel MS (2011) A comparison of ecological elements of current safety assessments and regulation of microbial and invertebrate biocontrol agents. BulletinIOBC/wprs 63, 61-64.

Sundh I & Melin P (2011) Safety and regulation of yeasts used for biocontrol or biopreservation in the food or feed chain. Antonie van Leeuwenhoek 99, 113-119.

Contacts at the Department of Molecular Sciences