Three mainstreams of research in my group can be singled out: 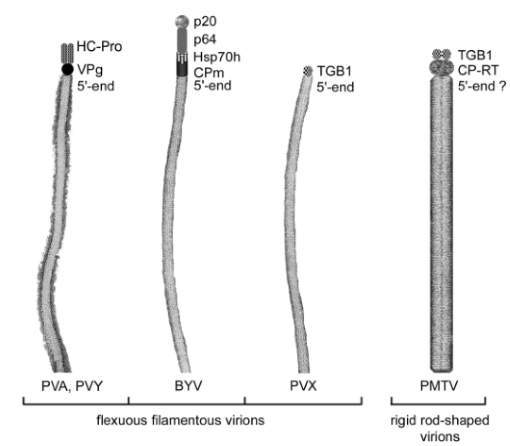 Fig 1. Intricate architecture of the rigid virions of a pomovirus, flexuous filamentous virions of two potyviruses, a closterovirus and a potexvirus. Until recently, elongated RNA plant virus particles were believed to contain just one structural (coat) protein. In the past three years or so, some viruses have been shown to possess terminal structures, which consist of proteins other than just the coat protein and CP-RT with the most complex apparatus found in the family Closteroviridae. A paradigm is arising according to which filamentous and rod-shaped plant viruses may have a complex apparatus on one extremity of the virus particles and these terminal structures contain viral movement proteins to facilitate virus cell-to-cell (e. g. potexviruses, closterovitruses) or long-distance (pomoviruses, our study) movement. Thus, our study (Torrance et al, 2009) contributes to the paradigm shift. PVA, Potato virus A; PVY Potato virus Y; BYV, Beet Yellows Virus; PVX, Potato virus X. (from E. Savenkov lecture)

Soil-borne viruses are among the most harmful pathogens of sugarbeet and potato. Potato mop-top virus (PMTV) is considered the most damaging virus in Nordic countries including Sweden. PMTV causes economically significant disease in potato (“potato spraing” disease). “Spraing” symptoms (brown arcs and circles) in tubers have become a severe quality problem to potato production in Scandinavia. Chemical control methods for the fungal vector are ineffective and most potato cultivars grown in Scandinavia are susceptible making “spraing” a difficult disease to control. Infectious cDNA clones of PMTV genome have been engineered (Savenkov et al., 2003). Now we are in an excellent position to dissect the molecular details of the virus life cycle and to lead a break-through in understanding fungal-transmission and virus movement within the plant at the cell and molecular level. We use a combination of state-of-the-art molecular and cell biology tools and imaging techniques to dissect the mechanisms involved.

Virus transport in plants
We use FP-tagged soil-borne viruses to study virus cell-to-cell and systemic movement.

Analysis of cells in fluorescent infection foci expressing FP-tagged virus reveals a progression of different localizations from the leading edge to the centre of the lesion. We are currently characterising these novel cellular and virus-programmed pathways for the virus cell-to-cell and systemic movement (Fig 1 and 2). We are also dissecting the molecular details of the systemic movement of fungal-transmitted viruses. Our recent data suggest a novel concept for systemic movement, genome integrity and stability of multipartite viruses (see e.g. Fig1).

Cystein-rich proteins (CRPs), the virulence factors of pomo- and carlaviruses
Pomoviruses belong to the family Virgaviridae characterized by rigid rod-shaped virions, whereas Carlaviruses within the family Flexiviridae have flexible filamentous virus particles. The genomes of carla- and pomoviruses consist of one (carlaviruses) or three (pomoviruses, Fig.3) RNA components. However, despite their dissimilar virion morphology and genome organization, some common elements are present among these viruses. 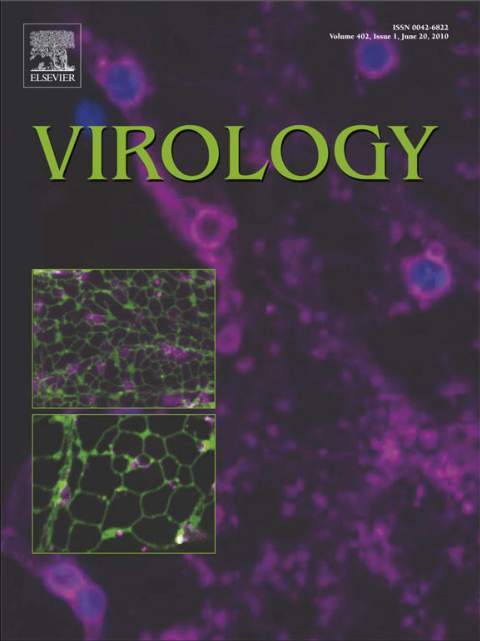 Fig 2. Cover art image showing localization of one of the PMTV TGB3 movement protein mutants, which does not co-localize with TGB2, does not associate with the ER, but is associated with other subcellular membranes including plastid envelopes (blue – chlorophyll fluorescence).

This article was published in Virology, Vol 402, June 20,Tilsner J., Cowan G.H., Roberts A.G., Chapman S., Ziegler A., Savenkov E.I. and Torrance L. (2010) Plasmodesmal targeting and intercellular movement of potato mop-top virus is mediated by a membrane anchored tyrosine-based motif on the lumenal side of the endoplasmic reticulum and the C-terminal transmembrane domain in the TGB3 movement protein, pages 41-51, Copyright Elsevier (2010
One is the possession of the genes, which encode small cysteine-rich proteins (CRPs). Another, is the presence of so-called ‘triple gene block’ (TGB) of movement proteins.The pomovirus CRP is associated with membranes of endoplasmic reticulum (ER) and when overexpressed induces dramatic perturbations of the ER network (Lukhovitskaya et al., 2005). On the other hand, the carlavirus CRP is a DNA- and RNA- binding protein that is predominantly localized to the nucleus (Lukhovitskaya et al., 2009). Despite the fact that exact function of pomo- and carlavirus CRPs in virus life cycle remains unknown; our recent data suggest the role of these proteins in the virus pathogenicity and virulence (Lukhovitskaya et al., 2005; 2009). Host responses to infection with pomo- and carlaviruses and to CRP expression are being studied using wild-type viruses, CRP null mutants and partially functional mutants.

Characterisation of “potato spraing” disease in South America
We engineered infectious cDNA clones for twenty Peruvian isolates of PMTV collected from ten fields in two locations situated 500 kilometres apart from each other. These isolates are being currently characterised. Sequence analysis and preliminary results show some significant biological differences between European and Peruvian isolates of PMTV.