Pesticides in air and precipitation 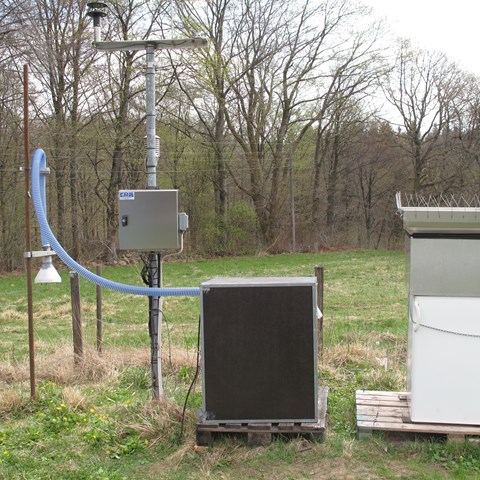 The sampling site in Skåne. Precipitation is collected in the steal funnel on top of the fridge (right) and air is pumped into the hose (left) passing a filter and a PUFF. Photo: Jenny Kreuger

Results from the sampling of air and precipitation within the National Environmental Monitoring Program of Pesticides are found here. Precipitation is collected in the counties of Skåne and Uppland. Both sites are situated far from nearest arable fields in order to avoid short range transport of pesticides, as the focus is on measuring the background levels of pesticides from long range transport. Air is collected, by filter and PUF, at the site in Skåne.

Collection of precipitation and air in the county of Skåne started at the site Vavihill (Söderåsen, Skåne) in 2002 but was moved to Hallahus (Söderåsen, Skåne) in 2017 (but 2016 for air). The Northern site was first at Aspvreten, in the county of Södermanland, but moved in 2017 to Norunda, county of Uppland. The sites of Vavihill (SE0011R), Aspvreten (SE0012R) amd Hallahus (SE0020R) is part of the EMEP network and Norunda is part of the ICOS-network.

Results presented in Excel-files (in Swedish)

(Contact Jenny Kreuger to get more information in English)

Read more about the Swedish national monitoring program of pesticides.

The Department of Soil and Environment is environmentally certified.

Contacts at the Department of Soil and Environment