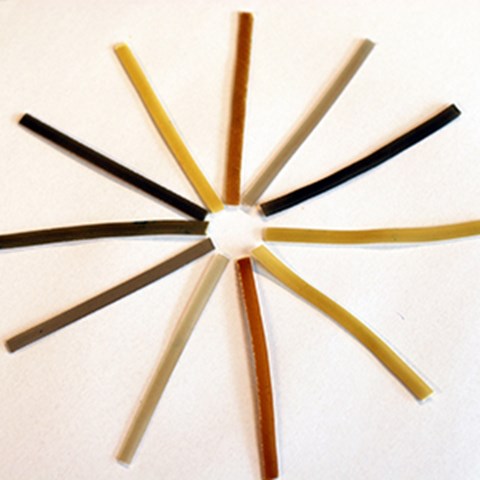 Plant breeders at SLU have developed a potato variety containing starch with a low glycemic index and with properties that seem to make it suitable for making plastics. Another material that has been shown to be suitable for production of bio-based plastic products is protein from wheat. Now, research teams from SLU have made a composite material of potato starch and wheat proteins.

"It's soft, not so stiff, and it has a high potential to become something important in the future."

Researcher Mariette Andersson describes the material that she and her colleagues have made from the starch of a genetically modified potato. This plastic can be composted after being used. Furthermore, the starch has now been used as a part of a composite material. By tailoring mixtures of plant proteins and starch, molecularly and biochemically, one can design sustainable materials for various uses including packaging and plastic film.

In two recent studies Mariette Andersson and Ramune Kuktaite, together with colleagues at Swedish University of Agricultural Sciences, KTH Royal Institute of Technology, Innventia AB, MAX IV Laboratory in Lund and Institut Polytechnique in France, have tested how this particular potato starch works with proteins from wheat (gluten, gliadin and glutenin), which are possible components of the new material. The idea is to develop a stretchable and strong material. They used either glycerol alone or glycerol with water as plasticizer and extruded the plastics at two different temperatures, 110 °C and 130 °C. In the analysis, they could see that the different proteins reacted in different ways in combination with the starch.

"In some cases, the material became relatively soft and flexible, and in other cases, stronger and less soft", says Ramune Kuktaite.

The higher temperature induced a higher degree of protein cross-links. With glycerol + water as plasticizer, the starch got improved gelatinous properties, and the material became stronger, more stretchable and easier to process (compared to using only glycerol).

They also tested what happened to the protein structure at the nanometer level (a level that is one millionth of a millimeter), the mechanical strength of the plastics, and if the material let oxygen molecules to pass through. Some of the gliadin molecules adopted an unusual hexagonal structure in mixtures with starch, and this structure made the material stronger. The combinations of protein + starch worked well as an oxygen barrier.

Using biotechnology, the researchers decreased the levels of two enzymes regulating the branching of starch molecules in potato. This modification increased the glucose chain length of the amylopectin molecules. Thanks to this, the starch got the fiber-like properties that make it suitable as a component of a new environmentally friendly packaging material.

Wheat gluten is one of the largest polymers that can be found in nature. The main components are gliadin, which is a monomeric protein, and glutenin, which is a polymeric protein. The two proteins help to build a polymeric network which controls the characteristics that are important in the production of food products (such as bread) and plastics.

(may be published without charge in articles about these findings, please acknowledge the photographer)