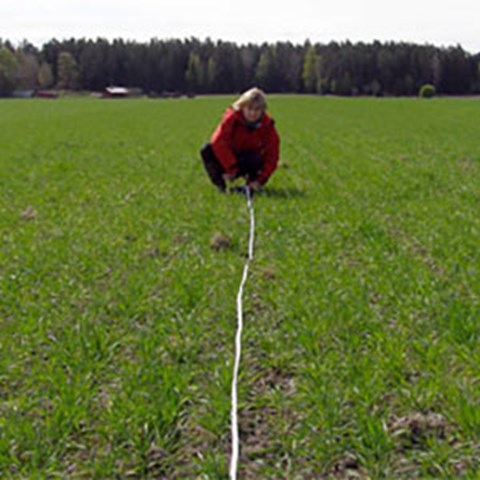 The wheat plant is, like other plants, colonized by entire communities of fungi involved in complex interactions. Some species benefit each other while others are incompatible antagonists. How these communities vary between different parts of the wheat and different developmental stages has been investigated in a new study from the Department of Forest Mycology and Plant Pathology at the Swedish University of Agricultural Sciences.

To the untrained eye, the vast field of growing wheat might seem like the very model of a monoculture; a single organism that has been draped over the landscape like a blanket. At the microbial level, however, this could not be further from the truth. The wheat plant is, like every other plant, a scene of intricate interactions between a large number of species, of which fungi constitute the larger part. Notwithstanding, the agenda of these fungi vary immensely. Some act as biotrophs; cloak-and-dagger pathogens that try to hijack the plant’s metabolism for its own use, without being detected and countered. Others are necrotrophs, waging open war against the host plant in order to physically overcome its defences and use its dead tissues as food source. Some still has no apparent negative effect on the host, but live on or within its organs either as a passive endophyte, neither harming nor aiding the host, or as a useful symbiont; a fungus that gives something to the plant in return for something else. These can be mycorrhizal fungi that enhance the plant’s nutrient uptake in return for sugar, but also mycoparasites that live off other pathogens, or fungi that physically block the plant’s surface to other species and thereby act as a shield. It has been shown that chemical control agents, intended to counter a certain pathogen, as an unforeseen side effect may kill such symbionts, thus creating an ecological niche for diseases that previously could not colonize the plant.

Because of these and other reasons it is important to understand these communities and how they interact. Naturally, this is especially true in cases such as wheat, which constitutes as essential food source for millions of people. A study with this particular purpose, conducted by researchers at the Department of Forest Mycology and Plant Pathology at the Swedish University of Agricultural Sciences, was recently published in the European Journal of Plant Pathology.

Magdalena Grudzinska-Sterno is the first author of the article. “These complex fungal communities are by no means static, but change with the growing season, developmental stages of the plants, local weather conditions, and other external stresses or stimuli”, she says. “Moreover, various parts of the plant are associated with different fungal species; a fungus that grows on the grain of wheat is not necessarily represented in its roots. This is why it was important for us to study the full microbial community of wheat, over time and across all plant parts; root, stem base, stem and grain. Statistical analyses could also explain which species benefit, or inhibit, others.”

A total of 58 different species of fungi where found in wheat collected from different locations. Photo: Magdalena Grudzinska-Sterno.

Most species within the roots

Magdalena and her colleagues collected wheat from different places in different stages of development, and analysed the fungal community in the different plant parts using DNA methods. They found 58 different fungal species in total, which probably cover the larger part of the community.

“We see that the community structure varies more across the plant parts than across developmental stage or geographic locality”, Magdalena Grudzinska-Sterno says. “This means that the differences are larger between the roots and grain of a single plant in Uppland in June, than between the roots of one such plant and one from Västmanland in August. The species diversity was also greatest on the roots, where we found 46 of the 58 species, and least in the grain, where we only found 29. This might be explained by the fact that the soil is more nutritious, sheltered and abiotically stable, which probably supports more species than the exposed grain.”

The researchers also discovered that non-pathogenic fungal species gradually disappeared from the roots during the growing season, in favor of certain pathogens that increase in abundance as the plant develops. But not only developmental stage affects the order of succession within the plant; so does its history of diseases. For example, the pathogen Oculimacula yallundae increased in abundance across the season, but only in plants that had previously been infected by another pathogen, Microdochium nivale. Generally, the researchers stated that it was more common that the presence of one pathogen benefitted another, than that two pathogens inhibited each other. This is probably due to that such antagonism requires either that conditions favoring one species disfavors another, or specific mechanisms of interaction between the species. Such are uncommon, but not unheard of. For example, stems already infected by Fusarium-species were less often infected by several other pathogens. For one pathogen to favor another, however, all that is needed is that the first pathogen constrains the defence resources of the host plant, which naturally occur at some level during every infection.

“One of the more common fungal species in wheat grain was Fusarium poae”, Magdalena continues. “This is one of the causal agents of Fusarium head blight. This serious disease creates an array of mycotoxins in wheat grain. F. poae has been observed with increasing frequency in many European countries and should be closely monitored in the future”, she advices.

The study could not find any case of antagonism between non-pathogenic and pathogenic fungi. Such interactions form the very base of so-called biological control of diseases, and is a well-known phenomenon, but it is probable that the very complex interactions going on in a field trial thwart the possibility to discern such effects. On the other hand, many cases of positive interactions could be shown, meaning that the presence of one fungus that does not affect the host plant in a negative way still supports, or at least coincides with, the occurrence of pathogens. It is unclear whether this is due to some active interaction between species, or if they are simply favored by the same external conditions, such as weather.

Lector Annika Djurle is another author of the study. “In conclusion, we state that wheat is colonized by a very complex fungal community, with species that mainly colonize specific organs, although some may be encountered throughout the entire plant. The composition is continuously changed with plant development but does not follow any apparent patterns, and it is difficult to see clear signs of antagonism between different fungal species. It is clear, however, that some species favor each other.”