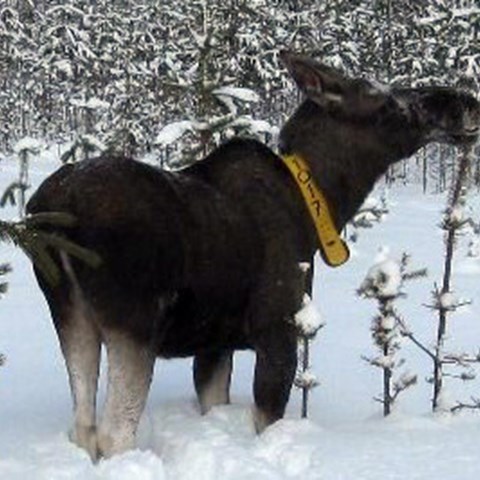 Wireless Remote Animal Monitoring (WRAM) is an e-infrastructure for biotelemetry data automatically collected by different sensors. The infrastructure is hosted by UC-WRAM at SLU in Umeå.

Due to the huge amount of data available from each individual in the WRAM database, LifeWatch harvests only aggregated position data from WRAM. Initially UC-WRAM provides data on moose (Alces alces) from different projects with GPS-collared moose in Sweden. During the initial phase, data from in total 596 individuals covering a total time period between 2003 and 2015 is publically available.

When harvested by LifeWatch, the raw spatial data (GPS positions) in the WRAM Data Warehouse are aggregated per individual at the level of one month into an monthly 'observation'. The aggregated 'observation' reported in the Analysis Portal is based on the midpoint of maximum and minimum latitude and longitude for the animal and month in question. The 'coordinateUncertaintyInMeters' value is calculated as the distance in meters between the midpoint and the maximum latitude and longitude position.

In other words: the minimum and maximum latitude and longitude for each individual and month form a rectangular box with the reported 'observation' as center point. The 'uncertainty' is then just the distance between the center point and the upper right corner of the box (max lat & lon in our hemisphere).

Swedish LifeWatch is a national collaboration between universities, public authorities and natural history museums in Sweden. The main goal is to provide a national e-infrastructure for biodiversity research, where distributed databases holding data on biodiversity and environment are connected through web services, using agreed standards and a common taxonomy. The Analysis portal provides a single access point to all data and a range of analytical services.