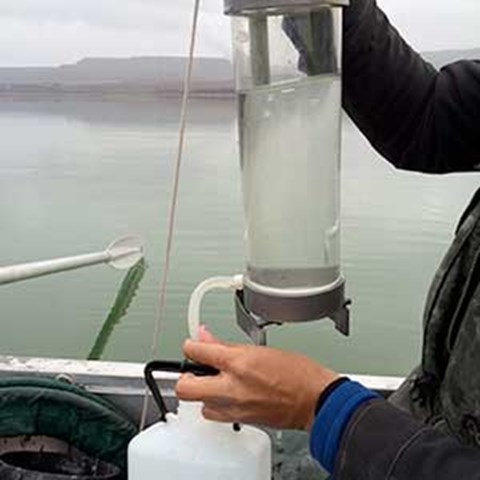 Micorbial communities in a gradient of biotopes, from conifer forest soil into the lake, were analysed. Photo: Maria Hellman.

A new study from SLU shows that microbial communities in neighbouring biotopes, from a conifer forest down into a freshwater lake, consist to a high degree of specialized microorganisms, and only to a lesser part of adaptable generalists. This risks making these communities very susceptible to climate change.

Microorganisms - bacteria, fungi, archaea - are present in every ecosystem throughout the world and play pivotal roles in a large number of ecosystem functions.  Bacteria are central to most biochemical cycles in soil and water, and are also deeply involved in processes mainly driven by fungi, such as mycorrhizal associations and degradation of plant tissue. Archaea are among other things important for nitrogen cycling, and they are the only known organisms able to form methane. In spite of being ubiquitous, microbial community structure varies widely between ecosystems. For example, methane-forming archaea like Methanosarcinales are considerably commoner in lake sediments than on dry land, while bacteria like Actinobacteria are all but omnipresent. Methanosarcinales is in that regard a specialist, mainly living in a single type of biotope, whereas Actinobacteria rather are generalists and adapted to survive in a number of different environments.

Most studies conducted on such microbial communities have settled for investigating a sole biotope or ecosystem at a time, without regarding how this interacts with communities in neighbouring ecosystems, or whether species may travel between them. This is however potentially valuable knowledge, especially in the light of ongoing climate change. Since these will have different effects on different biotopes, a holistic view is needed to better understand how a change in a single biotope also may affect microbial communities in neighbouring biotopes, or how the outcome varies when change strikes adaptable communities compared to more sensitive ones. This is the topic of a new study from the Department of Forest Mycology and Plant Pathology at the Swedish University of Agricultural Sciences.

Professor Sara Hallin is one of the authors of this study. "In our report, we used a gradient of biotopes at the Lake Erken in Uppland; from conifer forest soil across the shore into the lake and its sediment", Sara says. "The aim of this study was to investigate how the microbial community differs between these biotopes, and to what extent it consists of universal generalists or extremely adapted specialists."

The researchers used DNA-analyses to study the microbial communities in soil and water samples from these biotopes; conifer forest, dry hill, flooded land, agricultural soil, shore, and water and sediment samples from the lake close to shore respective far from shore. With statistical methods, they were then able to group biotopes according to similarities in microbial community composition.

"We could see two main groups", Sara Hallin says. "One consists of conifer forest soil and dry hill soil, and the other of every other biotope. Since these two are the driest biotopes in the study, the similarities are not surprising. The larger group could in turn be divided in two; flooded land and agricultural soil in one, and shore and lake samples in the other. The shore's direct contact with water enables species to travel between these biotopes.  Such bridges may also be the reason that we found that the community in deep water close to the sediment is more similar to the community within the sediment itself than to that in the upper water layers."

It turned out that the specialists, only occurring in a single biotope, vastly outnumbered the generalists. Among all microorganisms encountered, only six fungal species occurred in every investigated biotope, even though a larger number were only missing in a few ones.

"To be a successful generalist, a species need certain traits; fast dispersal, strong competitiveness, great adaptability and a small need for resources are examples of such", Sara Hallin says. "Specialists, which seem to make up the larger part of all microorganisms along our gradient, are certainly the fittest to their respective optimal habitat, but at the same time considerably more sensitive to change than the generalists. Climate change thus risks to strike hard against specialized microorganisms. This is especially true regarding the archaea, which were mainly found as specialists in lake sediment far from the shore."

Professor Jan Stenlid is another of the study's authors. "In conclusion, we can see that along our gradient, it is mostly the biotope that determines the composition of the microbial community, since we have noted much larger differences between biotopes than within them. This means that change-sensitive specialists outnumber generalists grossly. In an environment such as the one examined in the present study, the microbial community might be sensitive to climate changes. However, we could also see that areas that facilitate communication between biotopes, such as a shore or the zone between sediment and lake water, probably are important to the microbes’ ability to travel between biotopes."