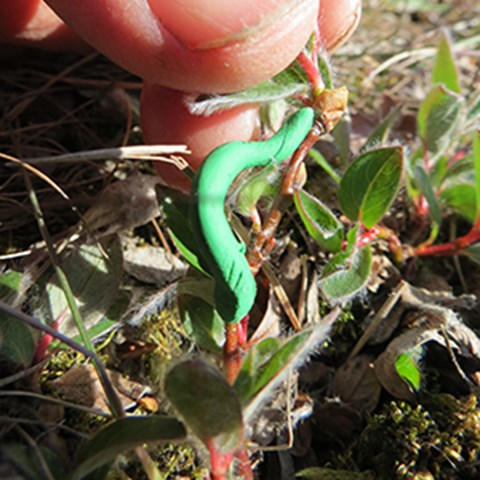 One of very few dummy caterpillars attacked at the northernmost study site at Zackenberg, Northeast Greenland. (Note the wedge-shaped marks of a bird beak at the lower part of the caterpillar.) Photo credit: Image by Tomas Roslin

It is well known that the tropics have many more species than the poles. But do the interactions among species also increase or become stronger nearer the Equator? A new study published in Science says yes, revealing a global pattern of predation on insect herbivores. The study deployed “dummy caterpillars” across the world to reveal predation hotspots – and who is behind them.

An international team made the discovery by examining the fraction of caterpillars eaten along an 11,635 km gradient from the Arctic Circle to southern Australia. What they found was that a caterpillar close to the poles has only one-eighth of the chance of being eaten compared to a caterpillar at the Equator.

"What was most fascinating was that the pattern was not only mirrored on both sides of the Equator, but also appeared across elevational gradients," says Tomas Roslin, who led the analyses. "Moving up a mountain slope, you find the same decrease in predation risk as when moving towards the poles. This suggests a common driver could be controlling species interactions at a global scale."

The findings were achieved with remarkably simple materials. To measure local predation rates, researchers glued thousands of caterpillars made from children's plasticine, a type of modeling clay, to plants across 31 sites around the globe. They then left these "dummy caterpillars" exposed to predator attack, and revisited them several times to check for attack marks. The predators of caterpillars, such as birds and ants, are tricked into thinking the model caterpillars are the real thing, only realizing they have been deceived when they have taken a bite.

"The great thing about this method is that you can track down who the predator was by inspecting the attack marks. The jaws of an insect, like an ant, will leave two small piercings, whereas a bird beak will cause wedge-shaped marks. Mammals will leave teeth marks – well, you get the idea" explains Eleanor Slade, a researcher at the Universities of Oxford and Lancaster, UK, who designed the globally-consistent approach.

To do this, a total of 40 researchers from 21 countries worked together. Consistency and standardization were key to make the data comparable across these far-flung locations. From a dummy caterpillar "hatchery" at the University of Helsinki, Finland, each researcher was mailed caterpillars all molded from the same green plasticine and all shaped as "loopers" (or "inchworms"). Even the glue used to attach them to plants was included in the kit to ensure the same look and smell of caterpillars across sites.

After exposure, the caterpillars were carefully detached from the leaves and returned to Helsinki. Back in the lab, a small team led by Bess Hardwick pored over each caterpillar to score them for damage. By attributing each attack mark to a specific predator group, the team was then able to identify a clear culprit behind the latitudinal gradient in attack rates.

"People often think of vertebrates as the most important predators in the tropics, but birds and mammals weren't the groups responsible for the increase in predation risk towards the Equator. Instead tiny arthropod predators like ants drove the pattern", explains Will Petry, who contributed data from California, and also helped analyze the data.

"The findings may also affect herbivore evolution", says Petry. "Our results suggest that tropical caterpillars would do well to target their defenses and camouflage specifically against arthropod predators. Closer to the poles, lower predation may allow caterpillars to let their guard down."

What the patterns also suggest is that arthropods are some of the strongest agents keeping plant-feeding arthropods in check. "To understand why the world stays green and is not fully consumed by hordes of caterpillars, we should appreciate the role of arthropod predators", says Roslin. "What our findings suggest is that their role may be even further accentuated towards the Equator."

Hardwick stresses that the current findings were only made possible by the massive collaborative effort between researchers across the world: "This is the beauty of what are called 'distributed experiments'. As ecologists, we typically ask questions about patterns and processes much larger than we as single researchers or teams can examine. But by designing experiments that can be split into smaller work packages, we can involve collaborators all over the world, and work together to understand the bigger picture."

Incidentally, it was a discussion between Roslin and Slade that triggered the whole project. "Tomas had used plasticine caterpillars in Greenland and thought they didn't work when he found very low attack rates. I had used them in the rainforests in Borneo, and had detected very high attack rates. Just imagine if these are the two end points of a global pattern, we thought. And that is exactly what they turned out to be", concludes Slade.

The authors used bite marks on the caterpillars to identify the predator. In this case, the plasticine caterpillar has been repeatedly pinched by the wedge-shaped beak of a bird. Photo credit: Image by Tapani Hopkins

One of very few dummy caterpillars attacked at the northernmost study site at Zackenberg, Northeast Greenland. (Note the wedge-shaped marks of a bird beak at the lower part of the caterpillar.) Photo credit: Image by Tomas Roslin