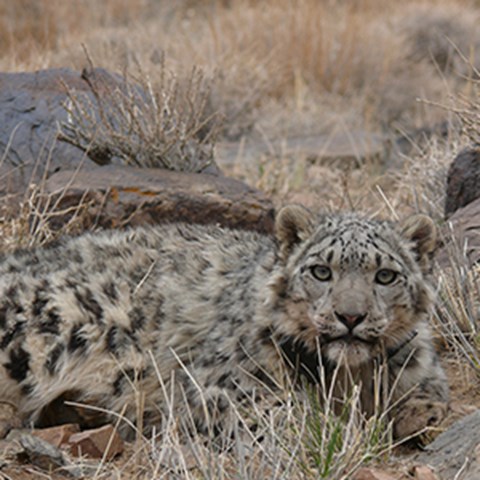 With the help of GPS data from collared snow leopards, research on this enigmatic carnivore has made great progress over the past nine years. One of the foreground figures in this work is Örjan Johansson, who has spent more than a thousand research days, and nights, in the Mongolian mountains. Now he presents his findings in a doctoral thesis at the Swedish University of Agricultural Sciences.

The snow leopard is native to the mountain ranges of Central and South Asia, from the Himalayas in the south to the Altai Mountains in the north. Thanks to their superb camouflage and elusive nature, it is very rare for anyone to see them. The short and rare glimpses of snow leopards almost exclusively occur in relation to livestock attacks, after which they slip back into the mountains and disappear. Consequently, throughout the species range, local people refer to them as 'the ghost of the mountain' or 'grey ghosts'.

Despite decades of research, knowledge about the nature of the species was very limited in 2008, when the Snow Leopard Trust launched a study with the aim to thoroughly describe the snow leopard's ecology. At that time, the technology needed to collect robust data on snow leopards, such as remotely triggered trap-cameras and light-weight GPS collars with satellite communication, had become readily available.

Örjan Johansson was soon engaged to manage field operations, and later on he was enrolled as a doctoral student at the Swedish University of Agricultural Sciences. Since the study started in August 2008, he has captured 23 different snow leopards, on 50 different occasions, and provided the animals with GPS collars.

"23 individuals may not sound so impressive, but no other study has been able to follow the whereabouts of so many snow leopards", says Örjan Johansson.

After more than a thousand days of field work in the Tost Mountains in southern Mongolia, it is now time for Örjan Johansson to present his findings in a doctoral dissertation. His thesis presents new information on major parts of snow leopard ecology.

The studies show that snow leopards kill much more prey than previously believed. Also, snow leopards were found to have killed more wild prey than livestock, despite livestock number being at least ten times higher.

Örjan Johansson and his colleagues have also been able to show that both males and females display territoriality and that they have much larger home ranges than previously thought – up to 44 times larger than previous estimates.

Örjan Johansson, Department of Ecology, will defend his PhD thesis Unveiling the ghost of the mountains - snow leopard ecology and behavior at SLU in Uppsala.

Link to a blog written during the years 2008–2012
https://snowleopardmongolia.wordpress.com/about/

Link to the homepage of the Snow Leopard Trust
https://www.snowleopard.org

During his field work, Örjan Johansson lived in a yurt, a traditional Mongolian tent. Most of the time, there were no more than two people in the camp, and sometimes he was completely alone, with a record of 45 successive days. Four-wheelers and motorcycles are good for different jobs. Photo: Gary Koehler

Regarding the snow leopard's conservation status

On September 14 the International Union for Conservation of Nature (IUCN) announced that it is down-listing the snow leopard on the Red List of Threatened Species from 'Endangered' to 'Vulnerable'. The requirements for a species to be considered to be endangered' by the IUCN are that there are fewer than 2500 adults and that the species is reduced by 20 percent over two generations.

"It is very unfortunate that the IUCN changed the status in it's red list, because the interpretation is that the snow leopard is not as threatened anymore, while scientists agree that the threat to the species is increasing", says Örjan Johansson. "At present, both the number of snow leopards and the range of the species are unknown. Population surveys have only been performed in a fraction of the possible range".