Fungal attacks on potato might be a gateway to nematode infection 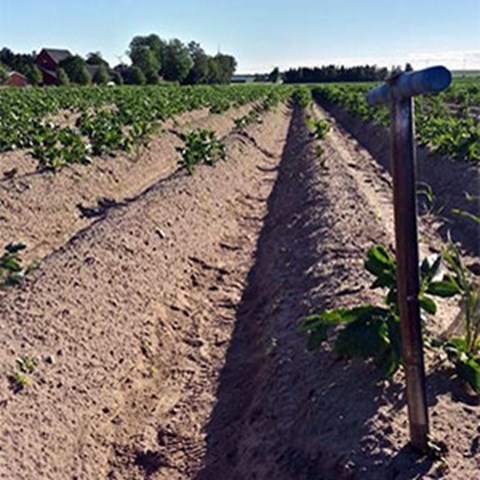 How common are nematodes in potato fields? Samples were taken to find out. Photo: Pia Björsell

Both the fungus Rhizoctonia solani and various nematode species belong to the enemies of the potato plant. But do they benefit from each other in their attacks? A new study from SLU shows that even though an attack by one of them might not enhance an attack by the other, some nematodes do occur more abundantly in soil around potato plants infected by the fungus.

The sole most serious assailant on conventionally farmed potato is usually considered to be Rhizoctonia solani, a pathogenic fungus causing numerous symptoms of disease, such as stem canker and black scurf. The potato has other enemies as well, such as nematodes. This group is very numerous and nematodes are indeed ubiquitous, present in plants, soils, water and animals. Many of them cause diseases. Potato is particularly exposed and attacked by both root lesion nematodes, invading the plant roots and live within them as parasites, and stubby root nematodes, which does not intrude into the plant cells but cut holes to eat them from the outside.

It has not been known whether these effects arise between Rhizoctonia solani and nematodes on potato. This was recently investigated in a study from the Departments of Ecology, and Forest Mycology and Plant Pathology, at SLU. Eva Edin is one of the authors.

"Advisors and farmers alike often mentions that they feel they discover more nematodes in potato fields attacked by Rhizoctonia, but this has not been quantitatively assessed in farmed, arable land", Eva says.

The scientists selected eight fields attacked by stem canker in Östergötland in Sweden. After serious attacks, an area of dead or dying plants emerges in the field. Further towards the edges of the area, fewer infections will be found. The researchers took soil samples in the middle of the area, at its borders, and in the uninfected part of the field. The nematodes in the soil were identified and quantified using microscopy.

"We discovered higher concentrations of stubby root nematodes around the infected plants than in other parts of the field", says Eva. "Interactions between these nematodes and other pathogenic fungi have been reported previously in for example sugar cane. Root lesion nematodes, on the other hand, occurred in equal abundance in all parts of the field."

A third type of nematodes, the potato cyst nematode, also occurred more frequently around infected plants, but was only found in three of the eight investigated fields.

"But the fact that some nematodes thrive when the potato plant is also attacked by stem canker is not to say that the infections enhance each other", Eva says. "For actual interactions between fungus and nematode to arise, the pathogenic impact of both in concert must be larger than the additive effect of them one by one. We also wanted to investigate this."

Eva Edin and her colleagues planted six different potato cultivars in pots in the green house, and treated them with fungus, nematode, fungus and nematode, or nothing at all. The impact was assessed as dry weight after eleven weeks of infection.

"The hypothesis was that nematode and fungus together would have a greater impact on the crop than the sum of the effect of each individually. Surprisingly, we could not see any such effect for any of the cultivars; the effect of fungus and nematode together was never greater than that of the fungal treatment plus that of the nematode treatment. However, we saw a large variation in how the different cultivars coped with the pathogens."

In conclusion, Eva Edin and her colleagues’ studies show that some nematodes benefit from the potato simultaneously being attacked by Rhizoctonia solani, but this does not necessarily mean that nematode and fungus together affect the potato plant more than the cumulative effect of the individual attacks.

"However, it is plausible or even probable that the nematode attacks increase in plants that are also attacked by Rhizoctonia", says Eva. "In that regard the fungus might make the nematode a larger threat than it would have been on its own, even though they do not show any interaction effects at the actual infection stage."