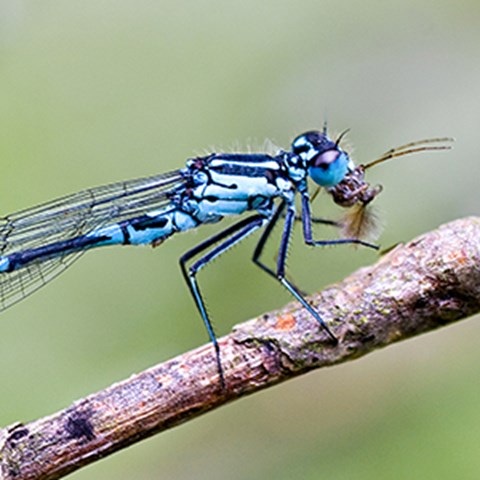 Researchers from Swedish University of Agricultural Sciences and the Universities of Turku and Helsinki, Finland, are the first in the world to discover which species adult dragonflies and damselflies prey upon, as modern laboratory techniques enabled the study of the insects’ diet. In the study, prey DNA was extracted from the tiny dragonfly droppings and the researchers managed to identify dozens of prey species from the samples. The results shed light on dragonflies’ position in natural food webs with an unprecedented specificity.

​Dragonflies and damselflies, i.e. the odonates, are numerous and quite large insects. As adults, they control the air space as the apex predators of invertebrates. However, the diet of dragonflies has never been resolved comprehensively as it is difficult to observe them catching or eating their prey. Now for the first time, a research group led by Finnish scientists has established which insects the adult dragonflies prey on.

The dragonflies' menu was studied by extracting and identifying the DNA of prey species from faecal samples. With this method, the researchers were able to identify in detail which insects the three studied dragonfly species had eaten and a large group of different prey species was identified as their prey. At the same time, the researchers discovered that the three dragonfly species prey upon practically the same species – and that they share their diet with birds and bats which are the dominant vertebrate predators.

– This study is very significant as dragonflies are at the top of the insect food webs all over the world and regulate the number of many other insect species. Therefore, it is important to know exactly which species they eat. From there, we can, for example, assess the dragonflies' impact on the populations of those insects that are harmful to humans. Yet so far, the information on the diet of adult dragonflies has practically been based on individual visual observations of their prey, says Researcher and leader of the research group Kari Kaunisto from the Biodiversity Unit of the University of Turku.

In the study, the researchers also tested the applicability of different methods for extracting DNA, and their results can be utilised in future research.

– When Kari told me of his idea, I was immediately interested. It was surprising that no one had done this before and I accepted the challenge at once. Often in research, earlier studies provide a starting point for laboratory work, but in this case we had to start from the beginning. In a new project, it’s a good idea to test different methods and we wanted to lay a good foundation for future studies, says researcher Eero Vesterinen from the University of Helsinki, who is about to transfer to the University of Turku. In his earlier research, he has specialised in the research of feeding biology, especially by applying molecular research methods based on DNA.

– As dragonflies are large insects, they have long interested researchers as well as nature lovers. The number of the odonate species is relatively small and identifying different species is easier than with other insect groups. Dragonflies are excellent model species for biological research also because they give indications of the state of both terrestrial and aquatic environments. Dragonflies spend their larval phase in water, after which they control the air space as the flying apex predators of invertebrates. The new study sheds additional light on dragonflies' role in the aerial food web, notes Professor of Insect Ecology Tomas Roslin from the Swedish University of Agricultural Sciences, who also participated in the study.

The study was recently published in the international Ecology and Evolution journal.

Read the scientific article published in Ecoloy and Evolution