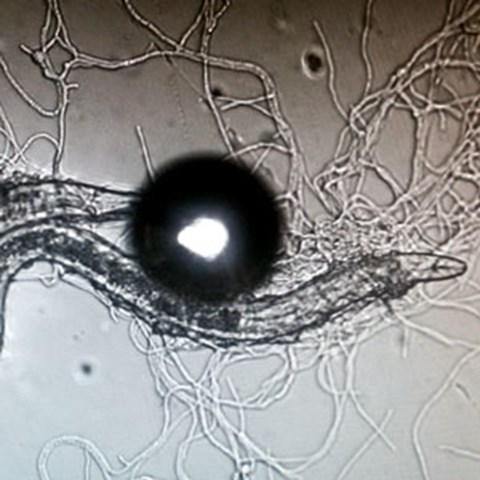 The biocontrol fungus Clonostachys rosea interacting with a nematode on a cellophane membrane. Photo: Mukesh Dubey.

The search for efficient alternatives to chemical pesticides in agriculture is of great importance to our future food supply. A new study from SLU shows that the mycoparasitic fungus Clonostachys rosea kills parasitic nematodes in soil, does not affect non-parasitic ones, and has a significant beneficial impact on crop health.

Limiting agricultural losses caused by nematodes is of utmost importance. This has previously been successfully managed through the use of chemical pesticides, but such bring an array of issues like accumulation of pesticide residues in soil, water, animals and humans, and a looming risk that the nematode eventually develops resistance. Chemical agents are therefore banned in many countries and also not allowed in organic farming. New control agents are needed, and the most promising niche is that of biological control; the use of naturally occurring antagonists to the pathogens.

One such antagonist is the fungus Clonostachys rosea, a mycoparasite on other fungi that also appears to harbor inhibiting effects on nematodes. It has also been suggested that C. rosea may induce a systemic defense in plants, thereby making them more resistant towards nematode attacks. However, it remains to be tested whether these inhibiting effects also mean that nematodes in soil and growing crops would actually be affected by a treatment with the fungus.

This is being investigated in a new study from the Department of Forest Mycology and Plant Pathology at the Swedish University of Agricultural Sciences. Mudassir Iqbal is one of the authors. 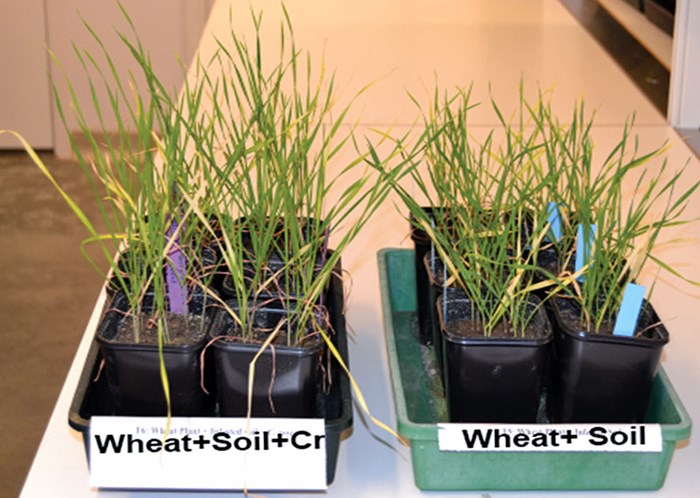 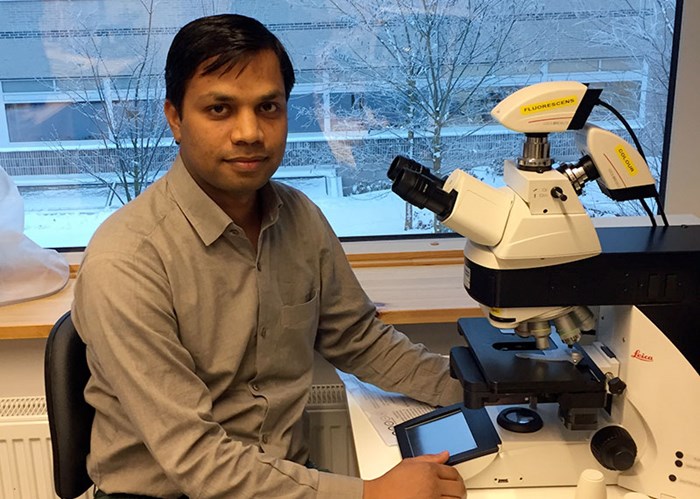 Mudassir Iqbal, PhD student at the Department of Forest Mycology and Plant Pathology at SLU, who has performed this study as a part of his doctoral thesis. Photo: Magnus Karlsson.

- We studied the nematode community in naturally infested agriculture soil from a field in Uppsala, Mudassir says.

- We treated the soil with C. rosea and subsequently planted carrot and wheat, respectively, in this soil in a green house. By analyzing the nematode communities based on morphological characters in treated and untreated soils with and without crops, we endeavored to measure the impact of the application.

The study showed a clear impact of C. rosea on almost all plant parasitic nematodes in the soil and roots. Among seven observed nematode genera, the individual count dropped by between 40 and 73% for all but one, in both carrot and wheat soil. In soil without crop, the nematode count dropped in four out of seven genera. Both carrot and wheat grew better in fungus-treated soil.

Mudassir Iqbal and his colleagues also investigated how this antagonism works in practice. Previous studies, using other C. rosea strains than in the present study, showed that the fungus parasitizes on the nematodes. Mudassir could however not see any signs of that in this study.

- But we did notice that nematodes were not able to grow in a medium in which the fungus had grown, but subsequently been removed from. This leads us to believe that C. rosea can utilize several strategies, of which one is to create a hostile environment in which the nematodes cannot survive.

- Our study thus shows that C. rosea is an efficient antagonist against plant parasitic nematodes in soil, but also that it does not attack other nematodes, Mudassir summarizes.

- This antagonism, in our study, seems based on the exudation of substances that inhibit growth of the nematodes. The treatment also has a notably positive effect on growth in both carrot and wheat. This is of course promising for the possibility to use the fungus as an efficient control agent against nematodes in agriculture, he finishes.

Nematodes are omnipresent wherever life may exist, and have developed almost any imaginable feeding strategy; amongst their ranks are bacterivores, carnivores, plant parasites, omnivores, fungivores etc. There are probably over one million species, of which over 4000 have been described as plant parasitic. These constitute major problems for agriculture. Approximately 15 % of the world's annual agriculture and forest production are lost due to nematode attacks, to an estimated value of 118 billion US dollars yearly.