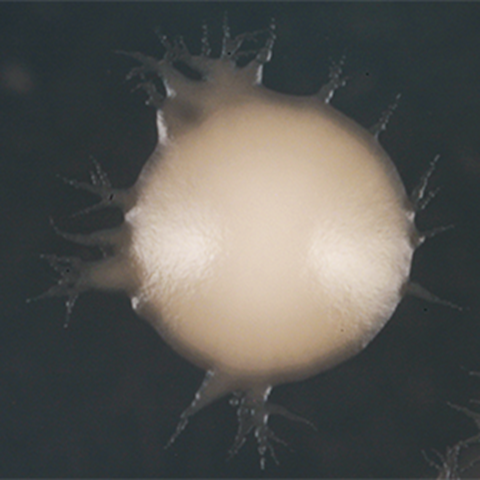 A close-up of a yeast colony growing on an agar surface. This particular species, Spathaspora passalidarum, was shown to use cyanate as a source of nitrogen. In nature, S. passalidarum lives in the digestive tracts of wood-eating passalid beetles. It is possible that the ability of this yeast to digest cyanate might benefit its insect host. The S. passalidarum colony in the photograph is approximately 2 mm in diameter. Photo: Tomas Linder.

In a recent publication by SLU researcher Tomas Linder, a number of yeast species have been found to assimilate the toxic compound cyanate as a source of metabolic nitrogen. Not only that, they appear to do it using a completely novel metabolic approach.

Cyanate (OCN–) is an oxidation product of cyanide (CN–) but can also form by decomposition of urea and some other nitrogen-containing biomolecules. Although not as toxic as cyanide, cyanate can still react covalently with biomolecules in the cell, causing inhibition of essential enzymes and forming adducts on proteins. The latter process, which is known as carbamylation, has been implicated in human aging.

Microorganisms such as bacteria and filamentous fungi have evolved ways to detoxify cyanate using an enzyme called cyanase, which essentially cuts the cyanate molecule in half to produce carbon dioxide (CO2) and ammonia (NH3).

The role of the cyanase enzyme appears to be intimately related to the ability of microorganisms to infect plants, which often employ cyanide-producing compounds in their defense against microbial pathogens. The presence of cyanase in these microorganisms would suggest that cyanate is an important intermediate during microbial detoxification of cyanide during plant infection.

In fact, the cyanase enzyme may be so crucial for feeding on plants that at some point in evolution, the cyanase gene “jumped” from the genome of an unknown microorganism into the genome of spider mites – a notorious group of agricultural pests.

The common intestinal bacterium Escherichia coli has been shown to use the cyanase enzyme not only to detoxify cyanate but also extract the nitrogen from cyanate and use it as a building block for making nitrogen-containing biomolecules like proteins and DNA.

Yeasts, which are single-celled fungi, have so far never been tested for their ability to use cyanate as a nitrogen source and for a long time, it was thought that yeasts do not possess the cyanase enzyme. However, with the price of genome sequencing dropping significantly, the sequences of a large number of yeast genomes have become available in just the past few years.

Are there cyanases in yeasts?

SLU microbiologist Tomas Linder decided to take another look at whether cyanases occur among yeasts or not. He found that the genomes of a small number of yeasts did in fact contain genes that looked very similar to cyanases. However, when he tried to cultivate two of these yeasts in a chemically defined growth medium where cyanate was the only source of nitrogen, both species failed to grow. The biggest surprise however, was that a number of other yeasts whose genomes did not contain cyanase-like genes grew really well in the cyanate medium.

– The yeasts without cyanase-like genes were meant to be the negative controls and supposed to show that without a cyanase, the yeasts won’t grow. Instead the exact opposite happened and the experiment ended up discovering a new pathway for cyanate assimilation, says Tomas Linder.

The results were recently published in World Journal of Microbiology and Biotechnology. However, the most interesting question still remains to be answered: if yeasts don’t use the cyanase enzyme to extract nitrogen from cyanate, what do they use?

– The assimilation of cyanate by yeasts that lack cyanase is classic example of a so-called unknown unknown, meaning a thing you didn’t know that you didn’t know. I think it really illustrates how significant discoveries are not always made over by the horizon. Sometimes – or actually a lot of the time, you just need to look really carefully right where you are standing., says Tomas Linder.

Once this new metabolic pathway (or pathways) for cyanate assimilation has been identified, it will be possible to re-evaluate just how widespread this approach to breakdown of cyanate is among other organisms beyond yeast. This knowledge can for example be relevant to understand biological responses to cyanate pollution. Cyanide is used for extraction of precious metals from low-grade ores and the leaching cyanide from mining wastes poses a serious environmental hazard. Therefore these wastes are often treated with sulfur dioxide or hydrogen peroxide so that cyanide becomes oxidized to cyanate, which is less toxic.

With a fuller understanding of how cyanate can be metabolized by organisms in the environment, it will be possible to establish the role of cyanate-degrading pathways in how organisms adapt to cyanate-rich environments such as those exposed to mining waste streams.

Read more about Tomas Linder at his CV-page