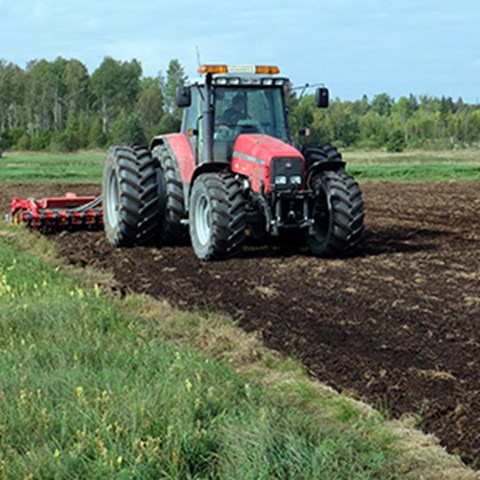 Drained peatland that is currently used for agriculture. From SLU's trial in Björklinge, close to Uppsala. Photo: Örjan Berglund

Preserving peatlands around the world from degradation can be a relatively inexpensive and effective measure to tackle climate change, according to an article in Nature Communications written by Jens Leifeld, Agroscope (Switzerland) and Lorenzo Menichetti, SLU. They have analysed available data to evaluate the costs of global peatland degradation in terms of greenhouse gas emissions. The researchers are surprised that peatlands do not get more attention within research and climate policy at an international level.

As long as peatlands are unexploited, they store carbon. Peat accumulates because of oxygen deficiencies caused by a high water table. When peat is drained and the water table is lowered, this limitation ceases and the organic matter accumulated over centuries starts to mineralise rapidly. The peatlands turn from a carbon sink to a carbon source.

In some countries like Sweden, peatland preservation is on the agenda. However, in an international context, this issue is not very highlighted in the climate debate, according to researchers. Especially not compared with the scientific and political focus on how to increase carbon sequestration in agricultural lands.

“This is strange if we consider the amount of carbon at stake. We do not question the fact that carbon sequestration in agricultural land is crucial to cope with climate change and should receive investments and attention. But simple preservation of peatlands has a comparable potential and is more cost-effective. Therefore, we believe it should be an important part of global climate strategies,” says Lorenzo Menichetti from the Department of Ecology, SLU.

The study estimates that emissions from the peatland currently degrading emits already 2 billion tonnes of carbon dioxide equivalents per year. To put this in perspective, soil carbon sequestration on all agricultural land has comparable mitigation potential. If we don’t prevent it, this exploitation could still go on, resulting in more and more peatlands emitting greenhouse gases every year.

Another interesting question is: Should we try to restore degraded areas?

“I cannot personally answer that,” says Lorenzo Menichetti. “Rewetting is known to produce powerful greenhouse gas emissions such as methane and nitrous oxides, so there are technical problems. Moreover, to answer that question, we would need to also consider societal, legal and financial factors. But what I can say for sure is that the simplest greenhouse gas mitigation measure I can think of is to protect the peatlands still intact today from further exploitation. The carbon in peatlands is already there, and there it should remain,” states Lorenzo Menichetti.

He is aware of the fact that preservation is not an uncomplicated question. In some African countries the use of peat can be the difference between poverty and a better life. If the international community wants poor countries to preserve their peatlands, they have to offer other sources of energy.

The researchers’ calculations are based on other research groups’ data and on maps of peatland. In some parts of the world, for example in the tropics, these maps are not complete.

“It's the best we can accomplish with the data we have, but our estimates are uncertain. Hopefully, we will have better data in the future. On the other hand, better data will not change the fact that peatlands play an important role in climate strategies,” says Lorenzo Menichetti.

Degerö Stormyr is one of the most intensively studied mire ecosystems in the northern hemisphere. The longest time series analysis in the world of carbon and greenhouse gas balance in a mire is being conducted here. Photo: Jenny Svennås-Gillner, SLU

Drained peatland that is currently used for agriculture. From SLU's trial in Björklinge, close to Uppsala. Photo: Örjan Berglund