Prestigious award to Patrice Humblot for achievements in embryo technology 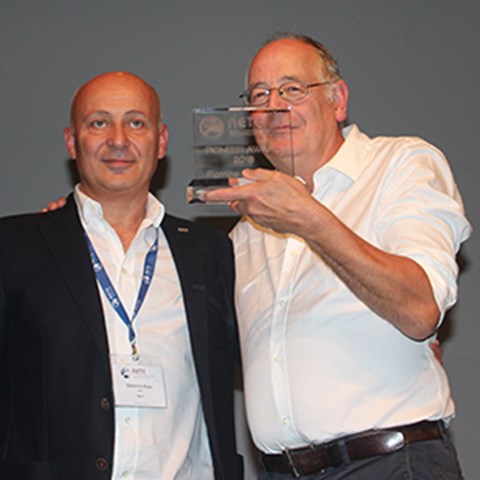 The Association of Embryo Technology in Europe (AETE) has awarded Professor Patrice Humblot at SLU the prestigious Pioneer Award to honour his outstanding research in animal reproduction, especially embryo technology, and his contributions to the organisation's development.

The award ceremony was preceded by a lecture by professor Humblot entitled "From clinics to (cow) mics: a reproductive journey". He described his early work in France, where he explored reproductive functions of cows and developed new diagnostic methods as well as embryo technology (including embryo genotyping). He also described his studies of reproductive disorders in cows using molecular genetics methods, research he is still performing at SLU in Sweden.

In the tribute speech held by Professor Emeritus Hilary Dobson of the University of Liverpool, Professor Humblot's achievements were highlighted with the fine final words "... to make the world a better place, and where better to target than the oocyte, sperm and embryo?"

More than 200 delegates from all over Europe participated in the convention. The aim of AETE is to facilitate the spread and application of mammalian embryo technologies by creating a forum for the exchange of scientific, technical and practical knowledge in Europe, and by regularly organising meetings between researchers, veterinarians, technical staff and students.