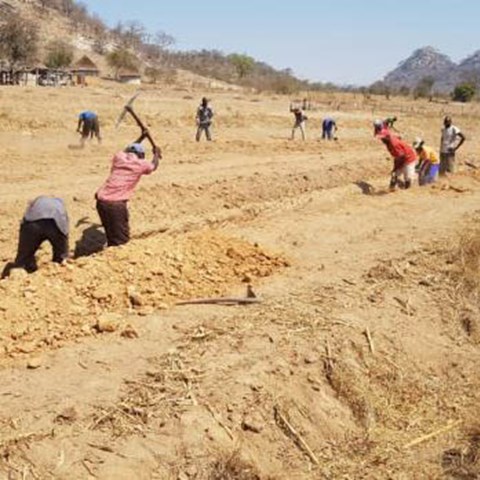 Smallholder poverty in sub-Saharan Africa is often linked to sandy soils, which hold little water and are low in nutrients. A new technology may be able to enrich fields and farmers without massive investments in irrigation and fertilizer, according to a study led by Swedish University of Agricultural Sciences (SLU).

Smallholder poverty in sub-Saharan Africa is often linked to sandy soils, which hold little water and are low in nutrients. A new technology may be able to enrich fields and farmers without massive investments in irrigation and fertilizer, according to a study led by Swedish University of Agricultural Sciences (SLU).

Many farmers across sub-Saharan Africa try to coax crops out of sandy soils that are not ideal for holding water and nutrients. Their harvests are predictably poor. A traditional approach would have them apply more fertilizers and use irrigation, but both of these options require access to resources and infrastructure that many of them do not have. A relatively new technology modeled for eight African countries, and currently being tested in Zimbabwe, shows potential for substantially improving harvests through increased water retention and accumulation of organic material to make soils more fertile.

The technology consists of long strips of polyethylene membranes installed in a U-shape below and near the root zones of crops. Known as subsurface water retention technology (SWRT), these membranes have mostly been used in different soils in other regions of the world. Now for the first time, their impact was modeled for Africa. Projected results showed that the SWRT could increase maize yields in the eight African countries in the study by close to 50 percent and capture some 15 million tons of carbon in 20 years.

"With this new technology, sandy soil has the potential to lead a new green revolution," said George Nyamadzawo, a professor at Bindura University in Zimbabwe.

The researchers said this simple technology, if deployed and adopted at scale, could address major issues facing sub-Saharan African farmers, including food security and erratic rainfall patterns, while also helping countries meet climate change mitigation targets. The study was published in Frontiers in Sustainable Food Systems in in September.

"We should refuse to allow sandy soils to limit smallholder farmers from reaching their full potential," said Ngonidzashe Chirinda, a researcher at the International Center for Tropical Agriculture (CIAT) who co-authored the research. "In arid and semiarid regions with poor soils, smallholder communities continue to suffer due to soil-based poverty. Our research shows SWRT has the potential to effectively change this without recurring to traditional and potentially expensive remedies."

For the study, SWRT was modeled for the sandy soils of eight countries in Southern Africa and Eastern Africa: Angola, Botswana, Kenya, Namibia, Mozambique, South Africa, Tanzania, and Zimbabwe. The main objective of the study was to model scenarios of adoption of SWRT and estimate increases in maize yields, crop biomass, and soil carbon sequestration.

"Potential benefits are obvious with new technologies such as SWRT, but there is a need to overcome non-technical barriers; this requires support from decision-makers who can put in place the necessary policies and financial mechanisms to support farmer adoption," said Libère Nkurunziza, the lead author and researcher at SLU. "Similar technologies should be tested and adapted to smallholder farmer conditions to solve productivity challenges on sandy soils."

Using data collected in other regions where SWRT has been tested, the authors made their projections for Africa. The technology is now being tested in Zimbabwe, through a new Swedish Research Council-funded project, called Productive Sands, that is being led by SLU.

"The new innovative, long-term SWRT will lead the way for modifying soils that best assist plant resilience to changing climates and associated weather patterns, enabling smallholder farmers of sandy soils to establish reasonable nutritious food supplies and annual income across all nations," said Alvin Smucker, a co-author from MSU and one of the pioneers of the technology.

"This fabulous contribution constitutes another great example of the need for increasing public and private investments in applied research on new agronomic practices and particularly those focusing on the management of soil fertility as an effective and efficient way of securing food production as well as sequestering carbon," said Ruben Echeverría, the Director General of CIAT.

"Congratulations to the authors for the research results and for building a great research partnership."

SWRT is based on the subsurface installation of impermeable water?retaining membranes of linear and low-density polyethylene, which reduce the amounts of water and nutrients lost through deep percolation, especially on coarse-textured soils. Since the time needed to breakdown SWRT membranes is long (estimated at >40 years), they represent a long-term solution to productivity challenges on coarse-textured soils in arid and semi-arid environments. Consequently, they transform soils characterized by low crop productivity into oases of sustainable production, that contribute towards feeding the burgeoning global population.