Soil, land use and climate change in focus on World Soil Day 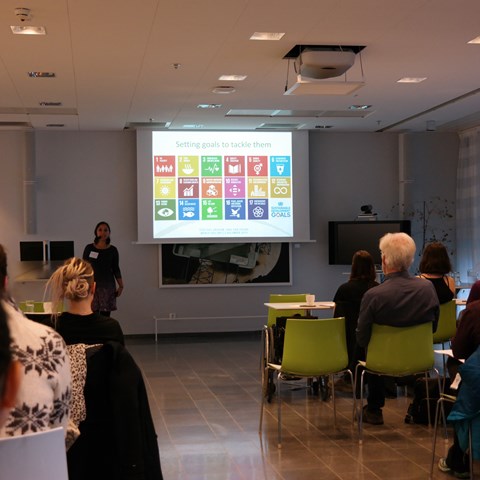 Good land use is a prerequisite for achieving several of the global development goals in Agenda 2030, according to FAO's Natalia Rodriguez Eugenio. Photo: Malin Planting

On 5 December, we celebrated World Soil Day at SLU, by hosting a seminar on Soil, land use and climate change.

FAO's Natalia Rodriguez Eugenio spoke about soil as an important resource and that good land use is a prerequisite for achieving several of the global development goals in Agenda 2030. Since 95% of our food production is dependent on soil ecosystem services, sustainable soil management is required in order to secure food production in the world. At the same time soil can act as a carbon sink and help to achieve the climate goals. In the soil we find half of the world's biodiversity, and soil microorganisms that produce antibiotic substances are an unused resource. The world's soils are currently under threat and the Global Soil Partnership (link) is a collaboration within FAO that works for sustainable use of land in the global agenda.

- We are organising this day to focus on how soil science can contribute in a wider context, said Helena Aronsson, Senior Lecturer at the Department of Soil and Environment, SLU, initially.

In addition to reports on the state of the Swedish arable and forest soils, discussions were held about land use changes, globally as well as in Sweden. When good arable land is being used for housing, cultivation must move elsewhere, perhaps to less productive land or to new arable land prepared by deforestation. Arable land in Sweden may need stronger legal protection so that exploitation can be limited.

During the day, the importance of interdisciplinary collaborations, including socio-economic factors, was discussed.

- It is important that there is a close contact between research, practice and decision-makers in order to make a difference, said Professor Ingrid Öborn, Department of Crop Production Ecology, in a concluding remark.

Around eighty participants gathered at the Ultuna campus and some followed the seminar via video link.

World Soil Day was established by the UN in 2014 and is held annually on 5 December to bring attention to the importance of healthy soils and advocating for sustainable management of soil resources. Globally, the equivalent of a football field of land is destroyed by erosion every five seconds and FAO's slogan for this year's World Soil Day is Stop soil erosion, Save our future.