Nitrate pollution in mining ponds may be reduced by adding carbon 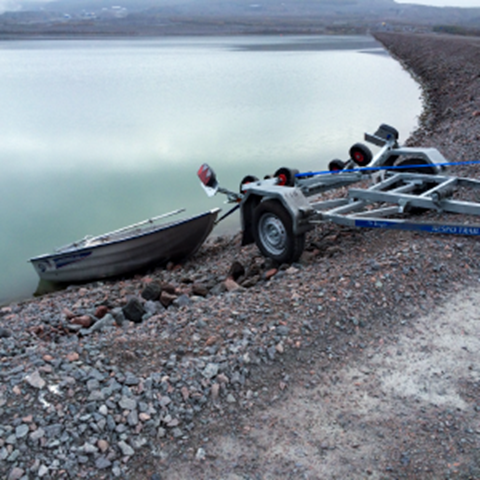 Water and sediment samples were taken from the water reservoir at the iron mine in Kiruna. Photo: Maria Hellman.

Water reservoirs used for mining purposes are polluted by nitrates from explosives, causing over fertilization further downstream in the water basin. A new study from SLU shows that it is possible to enhance nitrate degradation by adding carbon, but that the choice of carbon source is essential to not simultaneously increase production of heavy greenhouse gases.

Mining requires access to large quantities of water to extract the wanted minerals. This is why ponds are established at the mining sites. The water, polluted by the process, recirculates to the pond after use. Next to the ponds, rock waste is deposited in large piles. These contain ammonium nitrate from explosives and following rainfall, these compounds are rinsed off and end up in the pond. This makes the ponds very rich in nitrogen.

The nitrogen rich water in the ponds flows into surrounding water bodies and cause over fertilization. The water close to the ponds at the Kiruna iron mine contains over 500 times more nitrate than a point of reference in the Kalix river. About 10 km downstream from the pond, the levels are 100 times higher than the point of reference, and 10 km further downstream roughly 10 times higher. Compared to the nitrogen emissions caused by agriculture, mining emissions only represent roughly 1 %. However, these emissions are confined to much smaller areas and singular sites, and may have a great impact locally. The measured nitrogen levels are not in line with the EU Water Frame Directive and need to be reduced. New and refined mining technique has decreased the amount of ammonium nitrate residues in the rock waste, but the most practically applicable way to reduce nitrogen in water is though nitrogen degrading bacteria naturally occurring in the sediments. 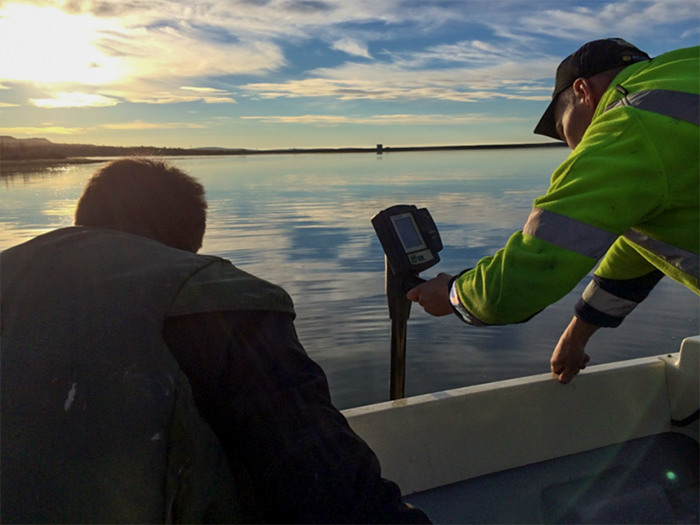 Measurement of the depth in the water reservoir at the iron mine in Kiruna where water and sediment samples were taken. Photo: Maria Hellman. 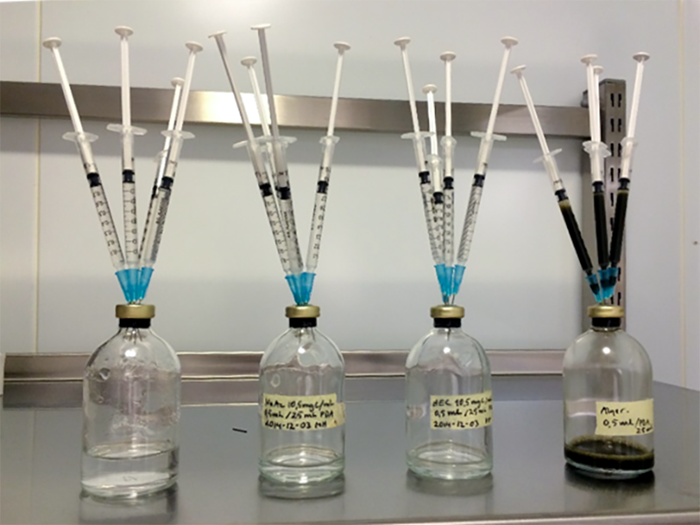 Three kinds of carbon sources, plus one control, were tested in the experiment. Photo: Maria Hellman. 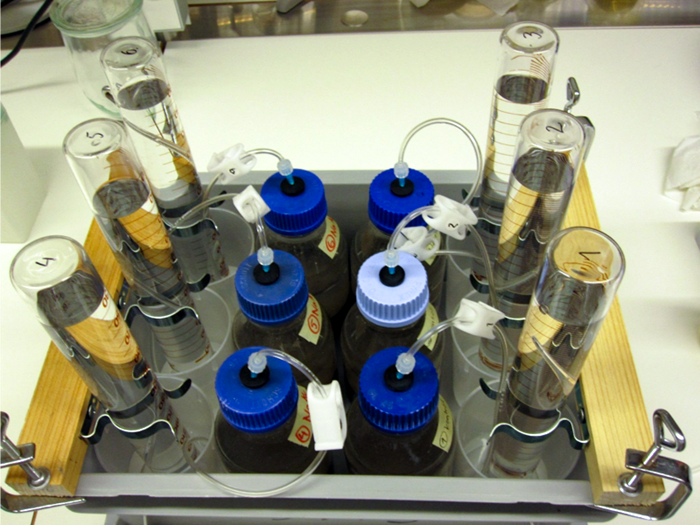 Bacteria employ different strategies to this end. Simply put, they can be divided in three groups; those converting nitrate to ammonium, which does not remove any nitrogen from the system; those converting nitrogen to nitrous oxide, a very potent greenhouse gas; and those also capable of converting the nitrous oxide into gaseous nitrogen. The latter is the only chain of events that decrease the amount of nitrogen in the water without increasing the emission of greenhouse gases, which is why it is desirable to benefit bacterial communities with this capacity (so called complete denitrification). This process requires access to carbon compounds that may act as electron donors. This is a scarce resource in the nitrogen rich ponds.

The importance of the carbon source

In a new study from the Department of Forest Mycology and Plant Pathology at SLU, it is stated that it is possible to reduce the nitrate levels in the ponds by adding photosynthetic carbon, but that the choice of carbon source needs fine tuning to achieve complete denitrification. Maria Hellman is the first author.

- Acetate is a known viable carbon source to enhance denitrification, Maria says. It is however not economically feasible to use acetate in large natural systems. This is why we wanted to try photosynthetic carbon.

The study showed that addition of algae or acetate converted almost all nitrate from the samples, while cellulose did not work as well. This is probably due to the large and complex cellulose molecule, which seems unsuited to donate electrons efficiently. However, the ammonium production was also heavily enhanced in the algae treatment, indicating that this has benefited ammonium producing bacterial communities. The production of nitrous oxide and methane was also highest in the algae treatment.

- These results show that although our carbon addition did eliminate nitrate, we did not succeed in benefiting the completely denitrifying bacteria that convert nitrous oxide into nitrogen, Maria Hellman says. Also, the algae treatment increased the methane production. Algae as carbon source thus risk increasing the emission of greenhouse gases to the atmosphere and the level of ammonium in the water as it decreases the nitrate levels. This notwithstanding, the observed large variations in efficiency between our treatments show that it might be worthwhile to fine tune the choice of carbon source to find a way to benefit bacteria capable of complete denitrification.