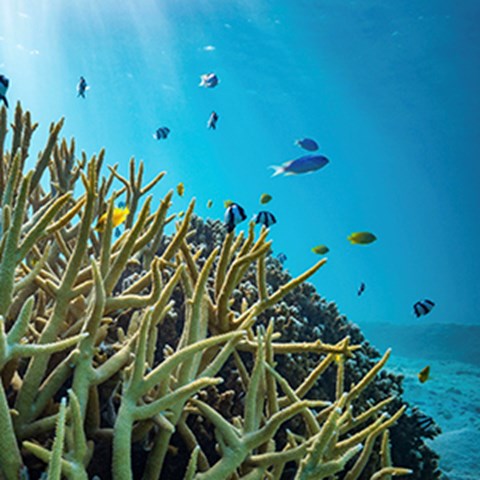 Coral reef with several fish species that were included in the study. Photo: Fredrik Jutfelt

"Fish in coral reefs will face many difficulties in the future due to global warming, but our study shows that it will not be due to ocean acidification changing fish behaviours," says SLU researcher Josefin Sundin, who participated in the study.

Carbon dioxide emissions lead to ocean acidification and global warming and also to more intense heat waves. Ocean acidification is a problem for creatures that rely on calcium carbonate to make shells and skeletons, such as coral reef organisms, while higher ocean temperatures lead to coral bleaching and death. Such consequences have been demonstrated in numerous studies by a number of different research teams, which means that there is consensus in the research community regarding these negative effects.

Over the past decade, a number of startling studies have also been published in which acidification has had a profound effect on the coral reef fish's sensory organs, leading to serious behavioural disturbances that could threaten fish survival. For example, coral reef fish were reported to be dramatically affected by increased levels of carbon dioxide — to the point where they would swim towards predators, rather than away from them. These reports described effects across a range of life stages and endpoints, including altered smell, hearing, vision, activity levels, boldness, anxiety and susceptibility to predation.

The negative effects of acidification were consistently very clear in these behavioural studies, but at the same time, the science of fish physiology says that fish have regulatory systems that allow them to cope with changing water acidity. A research team with participants from Australia, Canada, Norway and Sweden therefore decided to replicate the experiments.

No effects when the experiments were repeated

The studies were done in Australia and included a number of coral reef fish species. The researchers placed great emphasis on copying as accurately as possible the methodology used in the previous studies. They used the same species, collected at the same locations and performed their experiments in the same season. They were also careful to document in detail the experiments, which were filmed and analysed with computer programs. All to achieve the highest possible transparency.

"As far as possible, we used automated tracking software to analyse the videos from our experiments, to minimize observer bias, and we also made our raw data and analysis code available to other researchers", says Josefin Sundin, who is currently a researcher at SLU's Department of Aquatic Resources.

"We expected previous results would be easy to replicate because of how clear and strong they appeared in those papers. Instead, we found consistently normal behaviours in fish that we acclimated to carbon dioxide levels in line with what we expect to have at the turn of this century", says the article's lead author Timothy Clark, from Deakin University in Australia.

Thus, in the new study, none of the previously reported behavioural changes could be confirmed, even though the researchers repeated their experiments for three years, testing over 900 fish. In addition to the new data presented in the study, the authors also used data simulations and show that the phenomena reported in several previous studies are statistically highly improbable.

Surprising results must be repeated in new studies

The research community in the field of marine acidification and behaviour of coral reef fish has remained small, and the field stations are often remote and expensive to work at. This has led to a lack of independent assessments of previous results for a long time. The fact that the new study leads to completely different conclusions than the previous reports obviously raises questions.

"The differences between our results and most articles that report minor behavioural changes in fish at elevated levels of carbon dioxide could be due to the fact that few fish were used in the previous studies and that there were other methodological or analytical weaknesses. But we cannot understand the differences between our results and the studies that have shown extremely large behavioural changes and little variation in experiments done with many fish", says Josefin Sundin.

"Unexpected scientific results always spark interest from other scientists, but before too much trust is placed in the findings, the effects need to be repeated by other research teams. This independent replication is an important part of science. It is only when several research teams carry out independent repetitions that we can reach consensus on a certain result", says Fredrik Jutfelt, a researcher at the Norwegian University of Science and Technology. "We are now encouraging other researchers to do their own research into how fish behaviour is affected by rising carbon dioxide levels."

Josefin Sundin is a researcher at SLU since May 2019, and was previously working at NTNU – Norwegian University of Science and Technology, and Uppsala University.

A spiny chromis (Acanthochromis polyacanthus), one of the fish studied by researchers to assess the effect of ocean acidification on the behaviour of coral reef fish. Photo: Fredrik Jutfelt

Coral reef with several fish species that were included in the study. Photo: Fredrik Jutfelt