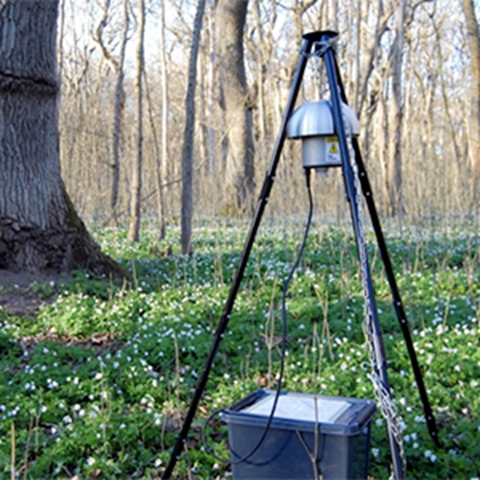 A new study from SLU shows that the local vegetation is the most crucial force driving the deposition of fungal spores in a specific place. Geographic location, or time of observation, is of considerably less importance to the species composition of the deposited spores.

The interaction between the terrestrial fungal community and living and dead plants play a crucial part in all forest ecosystems. Degrading fungi drive nutrient circulation, and mycorrhizal fungi are necessary for general plant health and thus photosynthesis and carbon dioxide consumption. The composition of fungal communities is highly dependent on spore dispersal, but it is not clear what factors govern what spores are deposited where. This could well be important knowledge to understand how forests are affected by being defragmented by agriculture or infrastructure, or how quickly abandoned or degraded soil may become naturally recolonized.

In a new study from the Department of Forest Mycology and Plant Pathology at the Swedish University of Agricultural Sciences, a group of scientists led by Jonas Oliva have studied the distribution of fungal spores and its driving conditions.

– The study is based on collections from spore traps, says Miguel Redondo, the leading author. The traps are either passively collecting spores landing on top of them, or actively sucking in spores through airflow. This means that the passive trap actually measures deposition, whereas the active trap measure the spores currently suspended in the air.

Vegetation important to the deposition …

Spore traps were positioned in wheat fields, deciduous forests and conifer forests in Uppland, Västergötland, Östergötland and Skåne in Sweden, between April and November, for two consecutive years. The collected spores’ species were identified through DNA analysis. Jonas Oliva and his colleagues expected that the vegetation type would be important to what fungal species were observed.

– That proved correct, says Miguel, but much more so regarding the passive traps than the active ones. We interpret that as the composition of deposited spores is primarily affected by what fungal species are associated with the local vegetation. The geographic location of this vegetation was of much smaller importance.

… but not to spores suspended in air

The composition of species in the air, however, was much less dependent on vegetation and more on seasonal time point, precipitation and temperature. This was probably due to that small, light spores that can be dispersed far and wide, are overrepresented in the active traps compared to passive, and highly affected by weather. For example, a rain shower would wash the spores from the air locally and have a big impact on species composition momentarily.

–Time during season also affected the types of fungi currently sporulating, and thus to be detected in the active traps, says Jonas. During summer, plant pathogens were overrepresented in the traps. This was also expected, since many pathogens are mainly distributed by spores and live off the greenery of plants.

Jonas Oliva and colleagues have shown that the type of vegetation is crucial to what spores are eventually deposited at a certain spot. The difference is much larger between a broadleaf forest and a conifer forest in Skåne, than between a conifer forest in Skåne and one in Uppland. This means that vegetation supports certain species, which thus may dominate local spore composition. A large spore production also means a larger probability that the spores will disperse farther away. Thus, fungi in separated habitats, such as patches of conifer forests, may enhance each other’s presence by dominating the local spore production and then spread to more distant habitats of the same type.