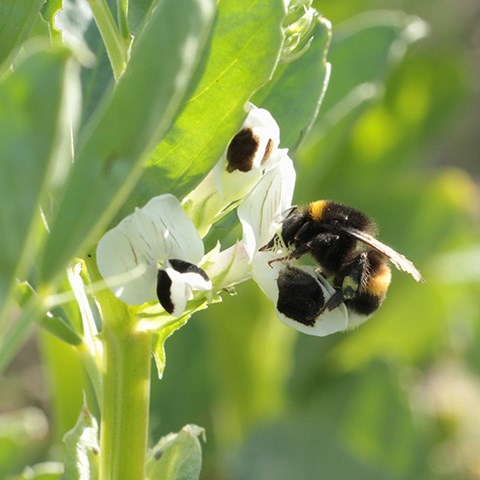 A study from SLU has explored likely effects of climate change on faba bean crops. The yield decreased sharply in stands that were exposed to drought, aphids or both. Regardless of stress level, however, pollinating bumblebees gave a substantial increase in yield. Irrigation of an aphid infested crop during a dry year had hardly any positive effect on yield, which highlights how important it is, and will be, to control insect pests.

“Climate change is predicted to hamper agricultural production due stress induced by both increasing extreme weather events and warmer temperatures, which might also lead to more abundant insect pests. We wanted to test the assumption that extensive yield losses due to climate change stressors could be mitigated by ecosystem services such as insect pollination”, says Chloë Raderschall, main author of the article that was recently published in Global Change Biology.

During summer 2019 twenty-four roofed cages were placed on a faba bean field outside Uppsala. The plastic roofs prevented rain from falling onto the experimental plots. Over a period of 46 days, these rainout shelters induced water stress to faba bean plants by simulating a long dry spell comparable to the extremely dry summer of 2018 in central and northern Europe, something that is expected to become more common by mid-century.

Twelve of the cages were used as controls and were watered thrice per week such that soil moisture remained constant. To induce insect herbivory stress, a subset of plants in each cage were infested with black bean aphids, which are considered one of the crops major pests. The third actor in the trio were bumble bees. With their long tongues they constitute an important pollinator of faba bean, which have quite deep flowers.

“Half of the dry and half of the watered cages were supplemented with a small colony of buff-tailed bumble bees in order to test how their pollination benefit to yield is affected by climate change stressors” explains Chloë Raderschall.

By studying the interaction between aphid herbivory, water stress and bumble bee pollination, the researchers found that faba bean yield was reduced by aphid herbivory (79 %) and water stress (52 %) when acting in isolation. Plants that were impacted by both stressors simultaneously showed a yield loss of 84 %. The yield from aphid-infested plants was thus very low, regardless of whether the plants had been irrigated or not.

“We conclude that yield losses can be greatly reduced when both water stress and insect herbivory are reduced simultaneously, says Chloë Raderschall.

The effect of insect pollination on crop yields after prolonged droughts has so far received very little attention in research. In this study, insect pollination increased yield by 68 %, regardless if plants were healthy or suffering from water stress and aphid herbivory, which surprised the researchers.

“Our hypothesis was that stressed plants would be less attractive to the bumblebees, but this did not seem to have been the case”, says Chloë Raderschall.

These results have important implications for crop management under climate change. Water resources are limited and freshwater withdrawal for irrigation needs to be minimised.

Hence, crop yield benefits can be maximised if use of irrigation is prioritised in crops with high levels of herbivore control. Similarly, because the yield loss caused by aphid herbivory was lower under water stress, the threshold for pesticide use against insect herbivores will be higher under water stress. The constant positive effect of bumble bee pollination on faba bean yield highlights the importance of managing agricultural landscapes to support pollinator communities irrespective of water stress and insect herbivory pressure.

“In order to ensure sustainable agriculture under climate change, where the use of agronomic inputs such as irrigation water and pesticides are minimised and reserved to cases where their effects on crop yield are critical, it is essential to gain a better understanding of how abiotic and biotic stressors interact with each other and with ecosystem services such as pollination” says Chloë Raderschall.

During summer 2019 twenty four roofed cages on a faba bean field changed the skyline of Uppsala. The plastic roofs prevented rain from falling onto the experimental plots, and shimmered in the sunlight like a mystical art installation. Over a period of 46 days, these rainout shelters induced water stress to faba bean plants by simulating a long dry spell comparable to the extremely dry summer of 2018 in central and northern Europe, which is expected to become more common by mid-century. Photo:Chloë Raderschall