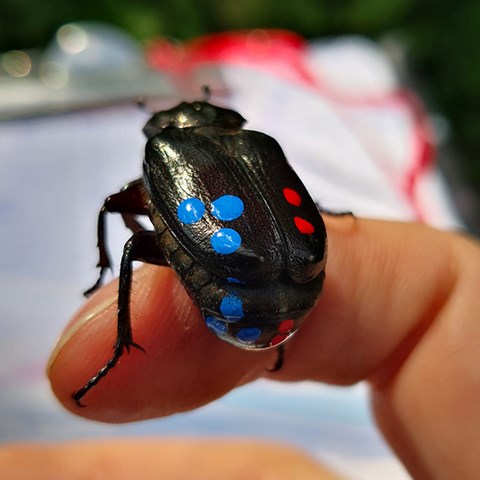 For 25 years, researchers have followed the hermit beetle (Osmoderma eremita) in oak pastures close to Linköping, Sweden. It is one of the longest (or maybe even the longest) studies of a species living in old trees. The population in the area have been relatively stable during the study period while it has varied in individual trees. Trees that were super trees for the hermit beetles 25 years ago have been replaced by new favourites. In the long run it is a problem that at many sites there are not enough young oaks that the hermit beetles can colonise.

The hermit beetle is a big beetle (ca 3 centimeters) living in hollow trees – in Sweden we usually find them in oak pastures. However, actually we seldom find them. They usually remain hidden inside the trees, but sometimes you can see them walking on the trunk or going for a short flight. If you are really lucky and meet one of these beetles you may sense a distinctive scent that reminds the scens of leather or apricots. It is a pheromone that the males emit to attract females.

The hermit beetle spend a long time as larvae – 3-4 years. Also as adults they prefer to stay in the same tree and when move to other trees they do not want to move so far.

“It takes a long time until you can see trends for such a species. Still, it is rare with such long studies. This has been possible by collaboration among researchers in ecology, who have been interested in the hermit beetle for different reasons. We have not had resources to organise anything in the long term, but still several enthusiastic researchers have worked with this. Some years the field work was led by researchers who were mainly interested in the pheromones of the hermit beetle” Thomas Ranius says, professor in Conservation Biology at SLU.

He began to study the species 25 years ago when he was a PhD student. He and his colleagues were pioneers in using pitfall traps in hollow trees. The researchers catch the beetles, mark them and then they count how many marked and new beetles they find in the trap next time (a capture-recapture study). By using a mathematical model it is possible to estimate the population size in each tree.

Ly Lindman, researcher in Thomas Ranius' group, has now followed up the inventory. She thinks it has been nice to work with such an adorable species in beautiful pastures – even though the grazing animals caused some interesting situations.

“The holes are often high up in the trees so you need to carry a ladder around. Once I met an angry bull who seemed threatened by my presence. As soon as he took his first steps towards me I ran to the fence, threw the ladder on it, and fled over it. Luckily we never met again, but I met many other animals, playful horses, curious cows and young playful bulls”, says Ly Lindman.

The study show that the population on landscape level (the metapopulation) been relatively stable over time during the last 25 years, but in most of the individual trees there had been a positive or negative trend in population development. Trees that were super trees with a lot more beetles than in other trees have been replaced by new supertrees. When conditions are optimal, up to 100 individuals can hatch in one tree each year.

“The hermit beetles want living trees. Therefore, it is important to ensure that the older trees live as long as possible. But there must also be trees that can become super trees in the future. It is a problem that there are often a low number of young trees in areas with numerous ancient trees”, says Ly Lindman.

The hermit beetle is considered less endangered today than what was believed 25 years ago. But if there are no suitable trees to colonise, the populations may in the long run become vulnerably small. Therefore, the hermit beetle may disappear from areas where the density of oak is not so high, because the hollow trees will become too far from each other.

The development of a hollow can be accelerated by damaging younger existing trees (‘veteranisation’ – a method to mimick natural damages). Not only the hermit beetle may benefit from that but also other species dependent on old trees.