Opening WUF10: towards a bottom-up approach to culture’ 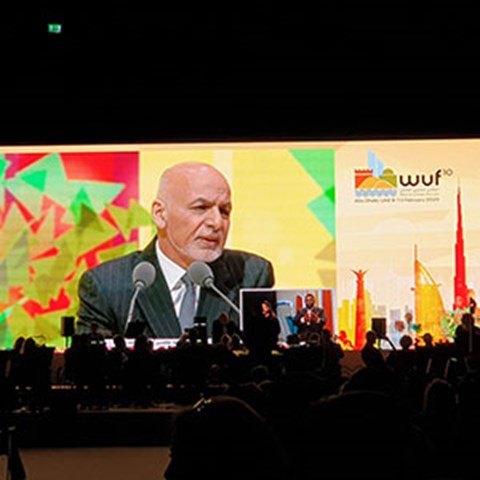 The theme of the 10th World Urban Forum is ‘Cities of Opportunities: Connecting Culture and Innovation’. In his welcome, His Excellency Falah Mohammad Al Ahbabi, representing the host, the Emirate of Abu Dhabi, reminded the audience of a saying from Sheikh Zayed, revered founder of the United Arab Emirates: “The real asset of advanced nations is its people.” Noting the difficulty of the times, and “compounding factors” like climate change, inequality and forms of violence, president of the Islamic Republic of Afghanistan, Ashraf Ghani, urged speakers and participants to take a broad, inclusive view of culture. A view informed by “masses, not elites… and their collective intelligence”. Ghani urged us to “reject stereotypes”, arguing “literacy and gender are not blocks” on participation. In an explicit critique on institutions of the global north, like the forum, he noted that “institutions also have cultures” that needed cultural change. This theme was picked up by Frank Bainimarama, the Prime Minister of the Republic of Fiji, who argued, despite being one of the smallest emitters of greenhouse gases, everyone must play their part, since 80% of cities lie along the coast and will be affected by sea-level rise.  The convenor of the forum, Maimunah Mohd Sharif, Executive Director of UN-Habitat, pointed out that the urgency that Afghanistan and Fiji show is a reminder to us all that these are urgent problems.

Ghani’s reminder about governance culture also shows how important culture is as the frame in which instrumental actions can occur. While the topic “culture and innovation” can seem like a generic platitude, when it is probed it reveals some interesting contradictions which are present in the Global South, for example between specific age-old traditions and digital technology. Ghani also urged a change from “urban planning to design thinking”.

In embracing culture, and its dynamic relationship as both “content and container”, Assistant Director-General for Culture of UNESCO, Ernesto Ramírez, cautioned against the superficial appropriate of culture by capital for urban branding. Architect Eduardo Moreno, Director of Research and Capacity Building of UN-Habitat talked about 3 stages of models of culture: culture as a source of capital; culture as a sense of place; and the convergence of culture.

Echoing the refrain of the opening speech by Ghani - “leave no one behind” -Polokwane Executive Mayor and President of the South African Local Government Association,Thembi Nkadimeng, argued this convergence must be focused on service delivery and a “bottom up” approach to culture, where all have access.

Organised and convened by UN-Habitat, the World Urban Forum has become the foremost international gathering for exchanging views and experiences on sustainable urbanisation in all its ramifications. The inclusive nature of the Forum, combined with high-level participation, makes it a unique United Nations conference and the premier international gathering on urban issues.

SLU's participation at the World Urban Forum is supported by SLU Global and led by Zeinab Tag-Eldeen, Researcher at the Department of Urban and Rural Development, and coordinator of the Research Platform ‘Sparking Research into Global Transformation’. SLU arranges side events where research results in the field of sustainable urban development are presented. You will also find SLU in an exhibition stand at the Urban Expo.

Julian Raxworthy is an Australian landscape architect and academic, currently residing in Dubai, after 5 years in Cape Town. He is an Honorary Associate Professor at the University of Queensland and reporting from the World Urban Forum for SLU Urban Futures.