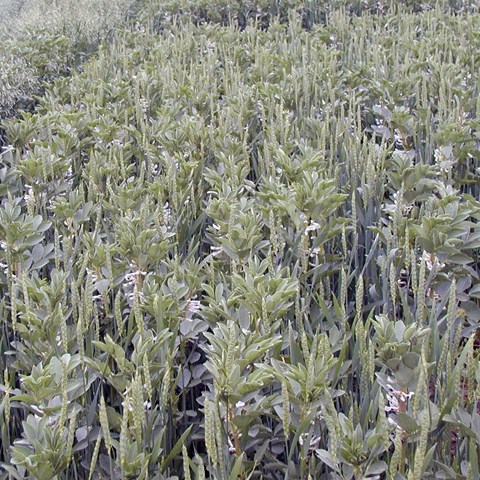 A global-scale analysis carried out at SLU and Roskilde University Denmark has investigated consequences for nitrogen and land use if all grain legumes currently grown as sole crops (soybean, pea, bean, lentils etc, in total 241 million hectares in 2017) would instead be intercropped with cereals. More efficient use of soil nitrogen in intercrops than in grain legume sole crops would result in a potential saving of 26% of the current global use of synthetic nitrogen fertilizer (currently 109 million ton of nitrogen). While intercropping requires more land than grain legume sole crops to produce the same amount of legume protein, the additional cereal yield in intercrops would allow for saving of land currently used for cereal sole crops. Ecological intensification by intercropping would lead to higher yields per unit areas, and consequently, about 115 million hectares of the current cereal sole crop area could be used for other crops to diversify agricultural systems.

The analysis indicates that there is a great potential in using agroecological practices in the development of more sustainable cropping systems. Reducing the use of nitrogen fertilizers through intercropping would be an important step to mitigate agriculture’s negative environmental impact, e.g. according to planetary boundaries for nitrogen additions and greenhouse gas emissions. In addition, intercropping can provide other potential benefits such as increased yield stability, reduced pest and weed problems leading to reduced requirements for pesticides. However, more innovations are required to develop intercropping in the context of modern mechanized agriculture.