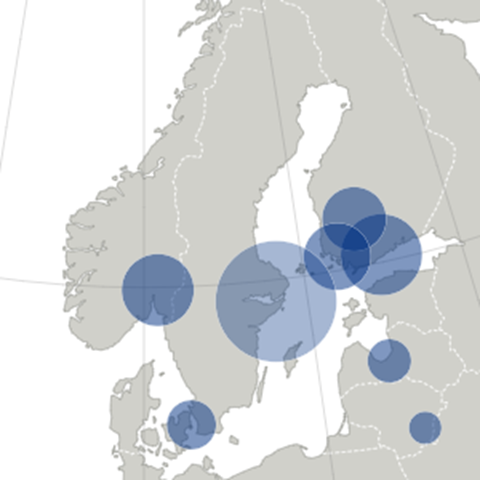 The use of illegal drugs such as amphetamine and cocaine can be estimated by analyses of wastewater, since residues of the drugs are excreted with urine and transported to wastewater treatment plants. Foon Yin Lai, Associate Senior Lecturer at the Department of Aquatic Sciences and Assessment, is participating in a European project that are assessing drug use in several European countries, including Sweden. The latest results point to an overall rise in the levels of the four drugs studied.

In 2019, drug use in 23 countries and 68 cities, including Stockholm, Uppsala and Gävle, were analysed. The wastewater was collected during one week in March, from wastewater treatment plants receiving wastewater from approximately 49 million people across Europe. Residues of amphetamine, methamphetamine, MDMA (ecstasy) and cocaine were analysed. Compared to earlier studies – the surveys started in 2011 - the results show an increase in drug use in most cities.

High amphetamine use in Sweden

Differences could also be seen within countries. In most countries the residues were higher in large cities compared to smaller locations, for all four substances. This pattern was also seen in Sweden. Drug use per person was highest in Stockholm for all four substances, although the levels of amphetamine detected in Gävle were similar. Drug use in Uppsala was lower that than drug use in Gävle for all substances except MDMA, which was about the same for both cities.

Cocaine and MDMA were more common during the weekends for most of the cities included in the study, indicating recreational use of these substances. Methamphetamine was found to be distributed more evenly over the whole week.

The analyses of wastewater from Stockholm and Uppsala were conducted in the laboratories of the Department of Aquatic Sciences and Assessment.

“Our analytical procedure and method have been validated through an inter-lab study with SCORE, the research network responsible for organising the annual drug use survey in Europe”, says Foon Yin Lai.

The European Monitoring Centre for Drugs and Drug Addiction (EMCDDA) is an agency of the European Union. Together with the research network Sewage analysis CORe group Europe (SCORE), EMCDDA annually conducts a survey of drug use in European cities using wastewater-based epidemiology.

SLU is a continuous partner in SCORE and a repeated study will be conducted this year (2020).

SLU has the methods and the capacity to analyse illicit drugs in water in research and for interested stakeholders.