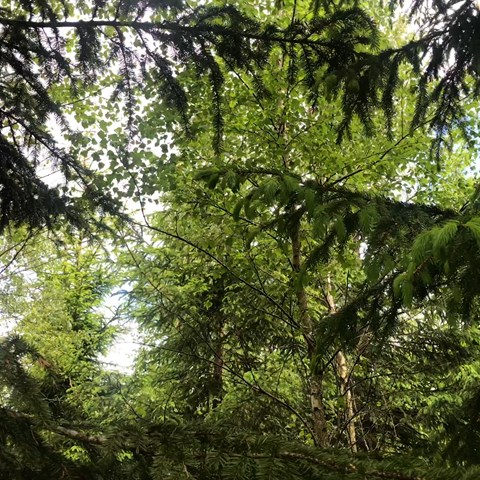 Increasing problems with windthrow, bark beetle damage, and root rot has led to a risen interest in finding alternatives to spruce and to increase the proportion of broadleaves in forests in southern Sweden. A new master thesis from SLU shows that mixed forest stands with a high initial proportion of birch provided an equal or slightly better growth than other simulations of forest management alternatives.

To increase tree species diversity in the production forests is by many expected to reduce the risks and damages in the forest while this also increases and secures ecosystem services. Babatunde (Ola) Dosumu focused his master thesis on combining measured data of young forest with simulations of growth during the full rotation period. With this data the growth and profitability of Norway spruce and birch in mixed forests and pure stands was compared.

The experiments of the study were established on highly fertile sites in southern Sweden with a common composition of young forests; planted spruce and naturally regenerated birch. The experiment started at the stage of the first precommercial thinning when the planted seedlings were two-three metres high and the birches were on average one-two metres higher. In the experiment the young stand was thinned to either a monoculture of spruce or birch, or to a mixture of the two with high or low birch proportion, which created a birch or spruce dominated mixture.

In Ola Dosumu’s master thesis he used the measured data of the trees from all the experiments and simulated further management and growth in the forestry planning tool Heureka. When the smallest trees of either species were removed and the so called TFB (thinning from below) was applied to the birch dominated mixture, it provided a slightly higher growth and significantly better economy compared to the spruce monoculture, but still retaining a 30% birch proportion at final felling. The spruce-dominated mixed forests had the same or higher growth and a better economy than the spruce monoculture, but couldn’t fulfill the requirements of birch mixture according to the environmental branding FSC (Forest Stewardship Council). The results also showed that the birch monoculture was the least productive and economic stand.

“It is interesting and surprising that the stand with a high initial proportion of birch provided a slightly better growth than all other stands. We can attribute this to the simulated thinnings where we always keep the biggest best-growing trees, but we would probably expect the spruce monoculture and mixed stands with an initially high proportion of spruce to have better growth,” says Ola Dosumu.

Ola Dosumu thinks that the results may contribute to a shift from spruce monocultures to mixed-species stands and that the new knowledge can have a practical impact on forestry in southern Sweden, especially since southern Sweden’s natural regeneration potential of birch makes establishing mixed stands in the region suitable. He argues that thinning was previously focused on retaining spruce monoculture until final felling but the result from the study means that forest owners can also get good economic value and improved growth by retaining good quality birch throughout the rotation.

“This result suggests a reduction in regeneration costs on sites or parts of sites where we can rely on naturally regenerated birch because then we only need to plant spruce at low density. Also, I think it could change the way we perform precommercial and commercial thinning in mixed stands, specifically in stands with spruce and birch”, Ola Dosumu says.

Ola Dosumu emphasizes that more research is needed on birch, specifically focused on looking into aspects of thinnings, how to develop good planning tools and how to produce high wood quality out of birch. He will continue to research planted birch silviculture as a PhD student in the new knowledge centre Trees For Me, and he hopes to increase his and the sector’s competence on forest growth and yield modeling with a specific application to birch species.

“In my PhD studies we will look into thinning strategies and how competition works in monoculture and mixtures. We will also look into what new models we need for the future, for example height development functions, biomass functions, growth functions on thinning response and more.”

Trees For Me - a knowledge hub focused on fast growing broadleaf trees for sustainable forestry, materials and energy in Sweden - treesforme.se