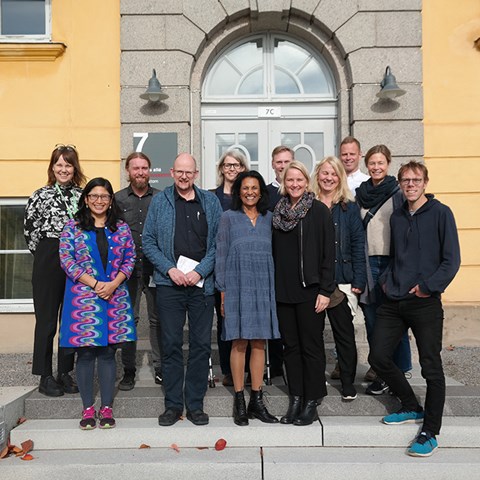 In connection to Shakuntala Thilsted's appointment as honorary doctor at SLU, a meeting and a workshop was held with WorldFish and researchers at SLU, active in aquatic research. The purpose was to explore joint interests and possibilities for future collaborations.

SLU is the academic partner in a collaborative WorldFish project in Sub-Saharan Africa. The project aims to increase the income and improve food security of 5,000 smallholder aquatic food producers as well as reduce waste and pollution in Kenya, Nigeria and Zambia. To further explore potential for future research collaborations between World Fish and SLU, the opportunity was taken for a meeting and a two-day workshop during Dr. Thilsted’s visit in connection to her appointment as honorary doctor.

– The vision and the mission of the new strategy of the CGIAR centres, to which WorldFish belong, are food, land and water systems in a climate crisis. This is the first time that water and water systems are included. With that, we at WorldFish have a very influential role to play, said Dr. Thilsted.

– It is interesting that at the CGIAR, we have five impact areas, very much in line with the focal points mentioned in SLU’s global policy: Nutrition, health and security; Poverty reduction, livelihoods and jobs; Gender equity, youth and social inclusion; Climate adaptation and mitigation; and Environmental health and biodiversity. So, there is a very high alignment were we and SLU can work together. I look very much forward to our future collaborations, Dr. Thilsted concluded.

– At our centre we don’t have anyone focusing specifically on climate change in Africa and the Pacific. So, this is one area where we can come together with SLU. Feed development is another example. The goal is to build on something that SLU could lead, said Hampus Eriksson.

A round of short speeches by the SLU researchers followed, where they talked about their interests in relation to WorldFish and possibilities for the future. Upcoming research calls from EU was presented by SLU’s Grants Office. After that an open and lively discussion took place.

Dr. Shakuntala Thilsted has been appointed honorary doctor at SLU's Faculty of Natural Resources and Agricultural Sciences. She is also the World Food Prize Laureate of 2021.

News articles: Sustainable aquatic feeds for resilient aquatic food systems in Sub-Saharan Africa and Aquatic foods are superfoods for people and for our planet

WorldFish is an international, non-profit research and innovation organisation reducing hunger, malnutrition and poverty across Africa, Asia and the Pacific. Aquatic foods for nourishing people and planet is the

CGIAR is a global research partnership for a food-secure future dedicated to transforming food, land, and water systems in a climate crisis.