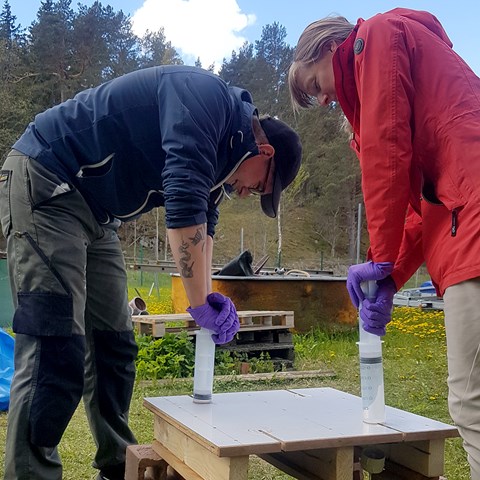 Researchers can now measure how much fish there is below the surface using only a water sample. In a study recently published in the journal Environmental DNA, Erik Karlsson and colleagues measured the concentration of pike DNA in the water, so called environmental DNA (eDNA). The authors found that in addition to showing presence of pike in lakes and rivers, eDNA can also be successfully used as a proxy of the abundance of pike.

The researchers measured eDNA concentrations in experiments performed in the laboratory and in large outdoor tanks. Both experiments showed a strong linear relationship between pike biomass and DNA concentration. This implies that fish abundance could be estimated from a water sample instead of using conventional lethal monitoring methods like gill nets. However, the authors of the study emphasize that despite promising results, more work is still needed before eDNA can be routinely implemented in field surveys for estimating fish biomass.

The authors also compared different methods of extracting DNA and to their surprise that one of the cheapest methods yielded the highest DNA concentration, offering a quick and cost-effective alternative compared with existing widely used eDNA-methods.

Fish are an important food source for humans globally, and they play an essential role in the ecosystem. Due to overfishing and environmental change, many species of fish have decreased dramatically in abundance. To sustainably manage fish stocks, robust monitoring data is needed to follow population trends over time. For species that are difficult to monitor using conventional methods, such as the Northern pike, potential solution is to measure the concentration of eDNA.

The article ”Strong positive relationships between eDNA concentrations and biomass in juvenile and adult pike (Esox lucius) under controlled conditions: implications for monitoring” is open access (CC BY 4.0) .