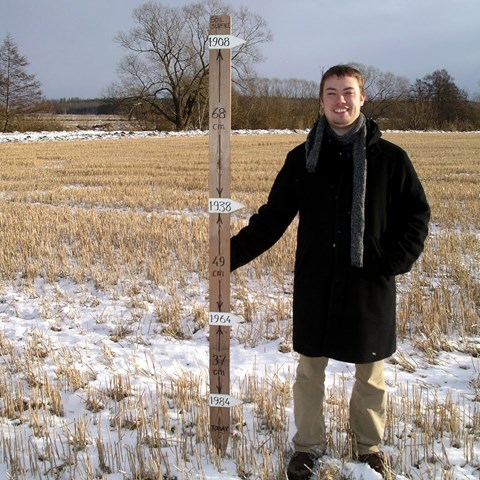 Within the subject area of hydrotechnology, since the 1980s there have been two series of long-term experiments: Oxidation of organic soils and Long-term soil structure effects of liming. A new experiment on controlled field drainage was added in 2009. All these experiments are located on private farms, since the soil type is critical for choice of experiment site.

A major problem following drainage and cultivation of organic soil is the surface lowering that occurs. It is generally limited on marine clays (gyttja soils) but can be very great on peat soils, where it is mainly dependent on four processes: peat settling, consolidation, shrinkage and decomposition of the organic material (also known as oxidation). In natural conditions there is some accumulation of organic material in a large proportion of our peat soils, which means that they store large amounts of carbon.   Following drainage and cultivation of peat, aeration of the soil is increased, which in turn means that the organic material is broken down more quickly than if it had been left undisturbed.  On breakdown of the organic material, greenhouse gases such as carbon dioxide (CO2), nitrous oxide (N2O) and methane (CH4) are released. Emissions of carbon dioxide dominate where there is good access to oxygen, while more methane is formed in anaerobic conditions. The rate of the process is determined by factors including climate, peat quality and degree of soil aeration (water content). The experiment series started in1986 with seven experiments, which are monitoring peat oxidation (surface lowering) through regular land surveys and chemical and physical analyses. The experiments are not harvested plot-wise, but are used for research projects investigating greenhouse gas emissions from cultivated organic soils.

Good soil structure is essential for sustainable agriculture and high crop yield. Structure liming is one of many ways to maintain and improve the structure of the soil through the physical changes that liming brings. Incorporation of structure lime (quicklime and slaked lime) has been shown to improve soil structure and give higher yields. In a clay with good soil structure, snowmelt and rainwater infiltrate in across a broad front under slow flow that involves a large proportion of the pore system. If the structure is poor, however, the water tends to run off the soil surface or infiltrate through a few large cracks, in which the rate of water flow over the particle surfaces is higher. This causes soil erosion and clay particles are transported to neighbouring surface waters. Quicklime and slaked lime produce fast and distinct structure effects. Ground limestone, which is already in the easily soluble form CaCO3, commonly gives a more limited structure effect. However, some studies have shown that CaCO3 can give a certain effect in the longer term, after many repeated wetting-drying cycles.
The experiment series started in 1989-91 and now comprises a total of five experiments, of which three are located in Central Sweden and two in Scania (added 1999). The experiments are harvested plot-wise every year, while physical analyses are carried out when the budget allows. The experiments are also being used in a new research project in which we are studying the effects of structure liming on soil aggregate stability and phosphorus leaching.

The availability of devices to control the flow of water from drained agricultural land during the winter season, thereby controlling nutrient leaching, makes it possible to devise systems for regulating the groundwater level in the field that meet the need for crop security in agriculture, supply crop water requirements during the growing season and help decrease the environmental impact. This field experiment is located at Gärds Köpinge in north-east Scania. The experiment was first established in 2000 with funding from the Swedish Board of Agriculture. The experiment site is flat, with homogeneous soil that has high hydraulic conductivity in the topsoil and a dense subsoil layer at around 1 m depth that prevents deep percolation. Four experiment plots of 1440 m2 have been sectioned off with plastic sheeting to 1.6 m depth. The plots each have a separate tile drainage system consisting of four pipes at 1 m depth and 9 m spacing. The field is well equipped for studies of water and nutrient flows. The drainage water leaving each plot can be measured continuously. The drainage level can be adjusted steplessly. All cropping practices are carried out by the experiment hosts using conventional methods. At present, measurements are underway of flows, water quality and groundwater level in two plots with controllable drainage and two plots with conventional drainage. Other activities are dependent on the results of funding applications.