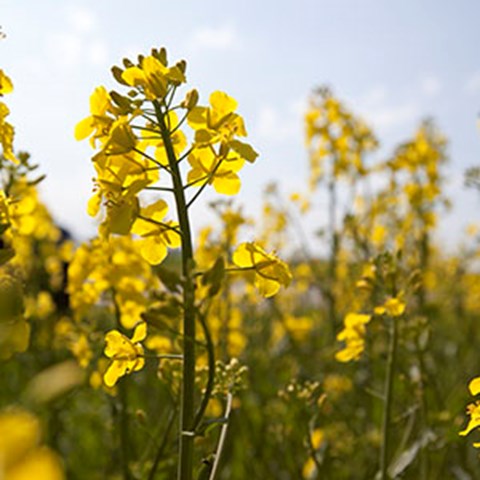 The use of soy in livestock production is strongly questioned, and replacing soy with native protein feed is one of the most important changes to reduce environmental impact and strengthen Swedish chicken production. Rape seeds and faba beans are two protein crops that are possible to grow in Sweden and there are great possibilities to increase their use in broiler chicken feed.

A limitation with virtually all domestic protein crops is that they contain some antinutritional substances (ANS) that may interfere with nutrient absorption in poultry. In rape seed, it is primarily glucosinolates and their breakdown products that is a problem. Degradation of glucosinolates is activated by the enzyme myrosinase. The limitation of the use of faba beans in growing animals is mainly tannins and trypsin inhibitors. White flowered faba beans are basically free of tannins, and both myrosinase and trypsin inhibitors are heat labile, therefore heat treatment provide opportunities to destroy these unwanted substances in the raw material before it is mixed into the feed. However, no information is available about the optimal time and temperature of heat treatment and how this affects the possible inclusion level in broiler chicken feed. The risk of an excessive heat treatment is that protein quality will be negatively affected. To investigate optimal heat treatment and its effect on inclusion level, four experiments were performed. One laboratory and one broiler experiment with rape seeds, and one laboratory and one broiler trial with white flowered faba beans.

The laboratory experiments were performed at Kungsängens research center, and rape seeds respectively faba beans were toasted in an oven at different times and temperatures. For rape seed the enzyme myrosinase was completely inactivated by toasting 120 ° C , 15 min , while the protein quality was maintained . For faba beans a decreased trypsin inhibitor activity and maintained protein quality was observed by toasting 140 ° C, 5.5 min, and this temperature was judged to be optimal for dry-toasting. The broiler experiment were performed on Lövsta research center, and in the rape seed experiment four inclusion levels of rape seeds where tested, 0, 8 , 16, 24 %, the effect of heat treatment was assessed by comparing untreated meal feed to steam pelleted feed.

For the pelleted feeds 16 % inclusion were possible without affecting feed intake, growth rate and feed conversion (FCR) negatively. For the untreated meal feed, FCR was maintained at 8 % inclusion, but the weight gain and feed intake was lower than the control diet and the chicken performance decreased linearly with increasing inclusion level. In the broiler experiment with faba beans four inclusion levels of faba beans 0, 10, 20 and 30 % were tested. The feeds were steam pelleted. In addition, for the 20 % level the effect of heat treatment and feed structure were also tested by use of two meal feed. In one of those feeds the faba beans were pre-toasted at 140 ° C, 5.5 min whereas in the other they were untreated before they were milled and mixed in the feed.