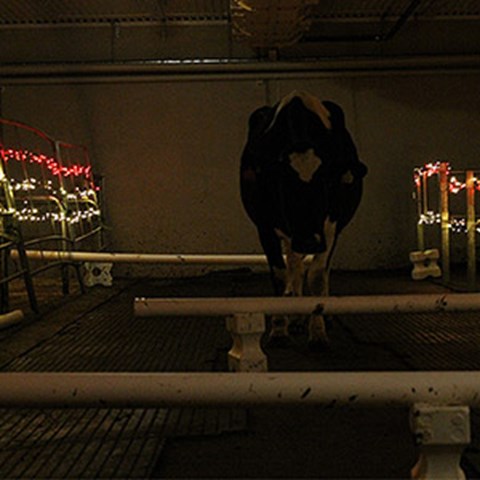 How well does a cow navigate among obsticles when it´s dark? (Photo: Sabine Ferneborg, SLU)

How do cows react on light of different intensity and different colours?

The welfare act in Sweden states that dim night light must be provided for dairy cows, although there is no specification on minimum or maximum light intensity. This paragraph of the welfare act is based on a general belief that cows are more easily startled in dark environments and that the risk of trampling injures therefore increases without night lights.

Farmers are also concerned that the activity of the cows might decrease during the night if lights intensity is reduced, which would be negative in systems with automatic milking where around-the-clock activity facilitates high production per milking unit. It has, however, not been studied which light intensity is needed for maintaining high activity. Due to this it is common practice to keep a rather high light intensity for 24 hours, making it difficult for the cows to separate day and night. In a previous study, we showed that the circadian rhythm of dairy cows might be altered when full light is on for 24 hours, and that the cows spent less time resting. Sleep and rest are crucial for the immune function, and lack of sleep might negatively affect the health and well-being of our dairy cows. It is therefore important, both from a production and welfare perspective and from an environmental perspective as electricity for lighting represents a large part of the energy consumption on a farm, that proper light intensity levels are applied.

Many studies have shown the benefit of providing sufficient light during daytime for dairy cows. Recommended light programs state that 16 hours of minimum 180 lux and 8 hours dark will have a positive impact on milk production. It is however no use in keeping the lights on for 24 hours – the effect declines if there is no dark phase to adjust the circadian rhythm.

We have conducted a number of subprojects which have increased our knowledge on how cows react on light of different intensity and different colours. So far we have concluded that cows do not have problem finding their way in low light intensities and that the cows' activity do not decline with low light intensity during night. Furthermore we have shown that 24 hours light affect their hormone production in a way that might be negative for milk production.

Our research on this topic has just begun and there are many more aspects of light and dark programs for dairy cows that we would like to continue to investigate! Don't hesitate to contact us if you have any questions about the project.