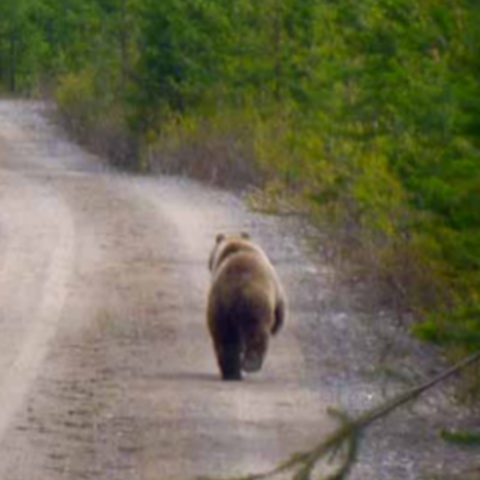 Brown bear predation on reindeer was investigated in two reindeer herding cooperatives in northern Sweden. Calving areas were located in the forest region where there was a relatively high density of bears. Pregnant female reindeer were fitted with proximity transmitters and bears were followed by GPS. The GPS collars on the bears detected signals from the reindeer transmitters when closer than approximately 100 metres. GPS positions were recorded every minute for one hour following a reindeer-transmitter detection by a bear collar (otherwise positions were taken every 30 min). This enabled the detection of clusters of bear locations that were visited in order to find possible killed prey.

During 2010-2012, 23 bear individuals were followed during altogether 1478 days. Totally 335 calves and 18 adult female reindeer were found killed at the clusters. Over 99% of the calves were killed from 1 May until 9 June. The average predation rate from bears that were within the calving area during 1 May-15 June was 0.4 calves per bear, per day (95% confidence interval: 0.2-0.5 calves per day).

Reindeer calving in pens and culling of bears are tested as preventive measures during an on-going phase of the project (2013-2016). Preliminary results suggest that reindeer calving inside pens may be an effective intervention in order to reduce bear predation. Impaired health and wellfare for the reindeer may however reduce the net effect if hygiene within the fences cannot be kept good enough. Effects of culling of bears have not yet been evaluated.

Frank et al. 2017. "Calving within enclosures and directed hunting as measures to reduce brown bear predation on reindeer" (in Swedish)