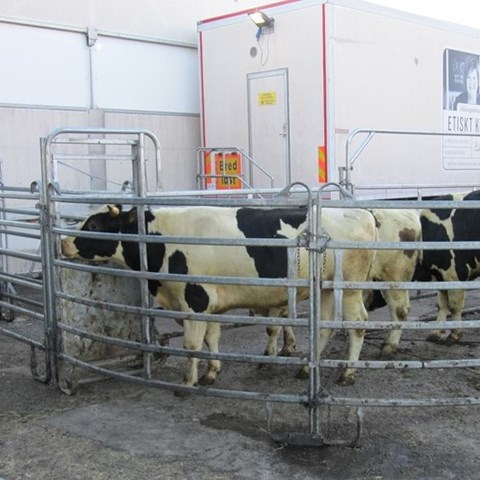 By avoiding animal transportation, mobile slaughter may have the potential to reduce animal stress. In a cross-sectional study with elements of cohort design, we investigated relationships between animal handling and stress-related animal behaviours in connection with slaughter at two Swedish slaughter plants: a newly started small-scale on-farm mobile abattoir and a relatively large-scale stationary slaughterhouse.

Data were collected during processing of 298 animals at both plants during one year. Stockperson actions and animal behaviours were observed in the driveways (2.4–7.3 m long) to the stun box. Data on season, hour of day, air temperature, animal breed, animal category, animal age, carcass weight and stockperson category (plant or farm) were also collected. To the stationary plant, the animals were transported on average 99 km from farms, and one third of these animals spent one night in lairage before slaughter.

This study shows the importance of adequate cattle handling to limit pre-slaughter stress.

Jan Hultgren
Senior Lecturer at the Department of Animal Environment and Health; Division of Environment, Care and Herd Health