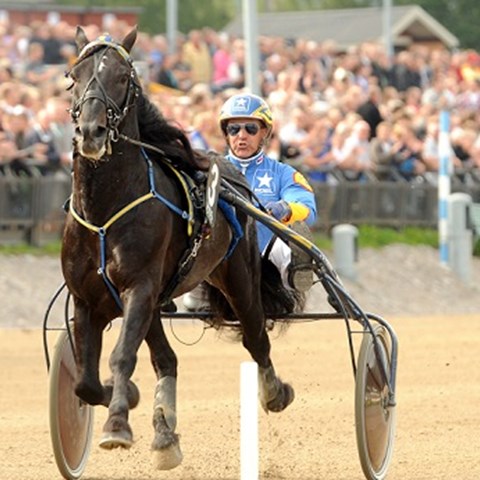 Dynamic laryngeal collapse associated with poll flexion is the most common disorder of the upper respiratory tract in the Norwegian‐Swedish Coldblooded Trotter. The disorder, which has also been diagnosed in other breeds of trotters and gaited horses, appears to be related to anatomic phenotypes and only occurs during poll flexion when the horse is exercised ‘on the bit’.

The objective of the current study was to identify genomic regions associated with dynamic laryngeal collapse (DLC) in the Norwegian‐Swedish Coldblooded Trotter (NSCT) by combining a rigorous phenotyping protocol with genomic data from a high‐density equine genotyping array.

One region containing 10 SNPs (Equus caballus chromosome [ECA] 7: 89,601,935–94,647,192) was above the suggestive GWS threshold. Two inferred haplotypes in this region demonstrated significant differences (P<0.001) between cases and controls, with the most frequent haplotype resulting in a significantly increased risk of DLC.

Small sample size as a result of stringent phenotyping protocols.

The current study highlights a candidate genomic region on ECA7 as potentially important with regard to the manifestation of DLC. Further exploration of this region and the genes included within it will bring veterinarians and researchers closer to fully understanding the biological mechanisms underlying DLC in horses.