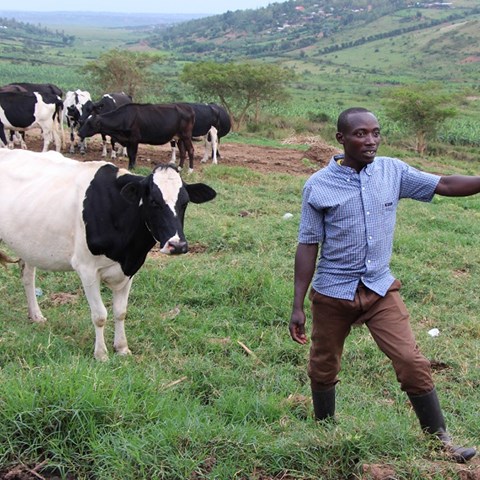 The objective of this cross-sectional study was to investigate prevalence, causative udder pathogens and their antimicrobial resistance (AMR), as well as cow and herd risk factors associated with subclinical mastitis (SCM = cows with at least one udder quarter with California mastitis test (CMT) score > 2) and intramammary infections (IMI) caused by Staphylococcus (S.) aureus or Non-aureus staphylococci (NAS) in dairy cows linked to Milk Collection Centers (MCCs) in Rwanda.

Screening for SCM with the CMT was done on 572 cows from 404 herds linked to two MCCs in each of four provinces. Milk from udder quarters with a CMT score ≥3 (scale 1–5) was sampled for bacteriological analysis.

The prevalence of SCM was 37.3 % at quarter level and 62.0 % at cow level. Bacteria were isolated 73.7 % of the cultured milk samples, whereas 23.3 % were culture-negative and 3.0 % were contaminated. Staphylococcus aureus and NAS were the most prevalent pathogens, representing more than half of all bacteriological findings. Staphylococcus chromogenes and S. epidermidis were the most prevalent NAS species identified. Of the S. aureus strains 83.3 % were resistant for penicillin, 100 % for clindamycin and 20 % tetracycline.

In conclusion, SCM prevalence was high across MCCs. The majority of identified pathogens were contagious in nature and they exhibited resistance to penicillin. Control of the identified risks factors and improved biosecurity through adoption of best practices, and farmer training could contribute to lowering SCM prevalence in Rwanda.